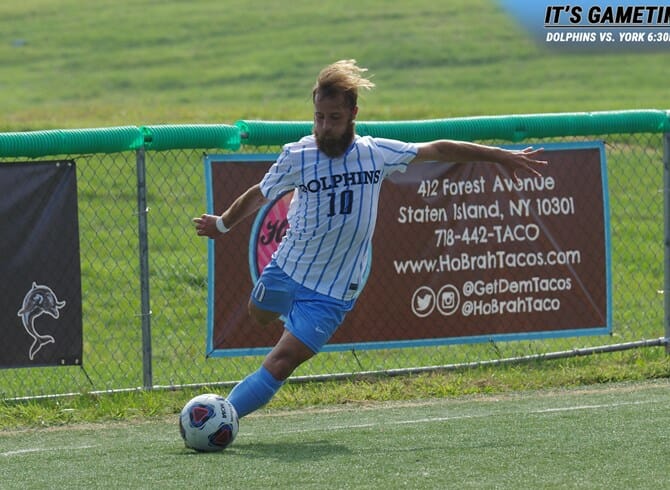 The men’s soccer team returns to action tonight when they continue their road tour of six of seven games away from home in a row.  Tonight they will take on York College at 6:30 pm in a CUNYAC matchup.

CSI vs. YORK COLLEGE AT-A-GLANCE
Matchup:  CSI (6-1, 1-0 CUNYAC) vs. YORK (1-5, 0-0 CUNYAC)
Where: Aviator Field, 3159 Flatbush Ave, Brooklyn, NY
All-Time Series: CSI leads 28-10-1
Last Meeting: September 21, 2016 – CSI won 7-0
Players to Watch (CSI): The Dolphins are led by a pair of outstanding freshman scorers.  Bryant Navarro leads the way with five goals this year while Joe Bolella trails behind with four. Ivan Barreraserao has played well between the pipes for the Dolphins, allowing less than a goal per game while boasting a 3-0 record in 251 minutes of action. Standing strong in the center of the pitch for the Dolphins is another freshman Joel Morales. Morales has played well in his role as a holding midfielder, winning 50-50 balls and picking out the correct passes to put his teammates in on goal.  For his efforts Morales leads the team with three assists and has score one goal of his own on 11 shots.
Players to Watch (YC): Ivan Brito paces the Cardinals with three points after netting one goal and collecting an assist in 404 minutes of action this season. Shavoy Campbell has also found the back of the net this season and will hope to double his total tonight against the Dolphins.
News and Notes:  As a team, the Dolphins are allowing .50 goals per game this season while scoring an average of two goals per game. The Dolphins are ranked in the top-20 in the nation for goals per game, averaging 3.29 (23) goals. York comes into tonight’s game allowing 2.5 goals per game so look for this game to be a high scoring affair for the Dolphins. The Cardinals opened their season with a 2-0 win over the College of New Rochelle, however, they have fallen in the last five games.  The Dolphins had the opposite happen to them as they started with an 0-2 loss at the hands of Wisconsin-Platteville and have not lost a game since.  The men are on a six-game win streak and have allowed just four goals over that stretch while scoring 23 of their own. Staten Island is on a seven-game win streak over the Cardinals with their last loss coming back in 2009. Since that loss the Dolphins have outscored the Cardinals 28-4.