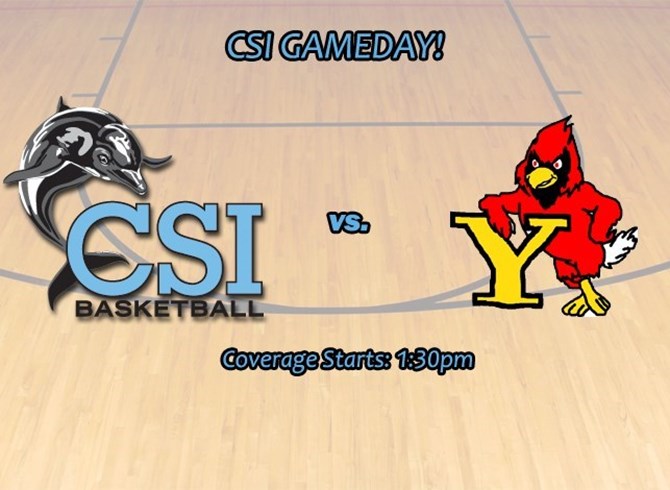 The College of Staten Island women’s basketball team will be taking its home floor today, beginning its quest for its seventh CUNYAC/Con Edison Women’s Basketball Postseason Championship. The top-seeded Dolphins are hosting #8 York College as part of quarterfinal play at 2pm.  Admission to the game is free but if you cannot make it you can follow in two ways.  The games will be broadcast locally on WSIA, 88.9FM and on the web at www.wsia.fm.  The game will also be broadcast via CSI SportsNet, with Mike Baybusky and Chris Soriano beginning the call at a special 1:30pm start time with the pregame show. A direct link to the show is available at www.csidolphins.com/live.

The Dolphins finished the regular season 19-6, and earned the CUNYAC’s top spot for the first time since 2003-04 after going 14-2 in the conference.  That included a pair of wins over the Cardinals, who enter with 3-22 overall, and 2-14 CUNYAC marks.  Still, a banged up CSI squad will have plenty to contend with this postseason.  The Dolphins lost point guard Lisa Galasso midway through the season and down the home stretch CSI has seen injuries to Melanie Johnson, Katelyn Hepworth, Nikki Fabozzi and Victoria Gallinaro all take their toll.  The question for this postseason will be whether or not CSI has enough gas in the tank and can they overcome the nagging injuries to make a quality impact.  CSI lost two of their final three games heading into the postseason, but are hoping their most recent, 100-58, win over Medgar Evers can be a springboard for the tournament.

One thing the Dolphins will have at their advantage, at least in the quarterfinal round, is history.  CSI has beaten York seven straight times and have won 28 of the last 29 meetings dating back to 2000.  The two teams have also met five times in the CUNYAC Playoffs, all in quarterfinal play, with CSI winning each time.  Should the Dolphins advance today, they would face the winner of #4 Hunter College and #5 Lehman College played later today.  In other quarterfinal action, #2 Baruch College faces #7 City College of New York and #3 Brooklyn College takes on #6 John Jay College.

There will be a few keys to victory for the Dolphins should CSI want to take home its first title since 2004-05.  The Dolphins are 10-0 this season when winning the rebounding battle, and are 9-1 this season when shooting better from beyond the three-point line.  Look for those categories to play a huge part in the team’s success this week.  Sophomore Megan Myhre hit nine three-pointers in the big win over Medgar Evers on Tuesday, putting her at 94 for the season, tops in CSI single season history and tops in the NCAA Division III.  More records were toppled Tuesday when CSI leading scorer Melanie Johnson went over the 400-point mark for the season, becoming only the 18th player all-time to accomplish the feat..

The CUNYAC postseason continues Wednesday at CCNY’s Nat Holman Gymnasium.  Game time would be 6pm.  The CUNYAC Championship will be played on Friday, February 28, at 6pm as well.