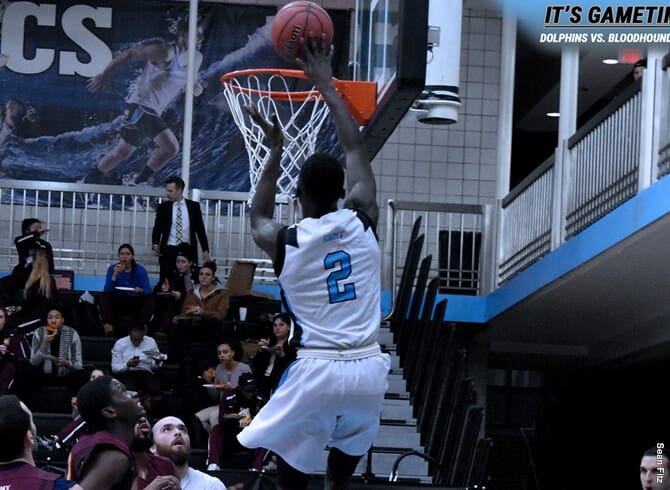 The College of Staten Island men’s basketball team is on it’s longest win streak of the season, and the Dolphins will look to keep rolling when they complete a two-game season series with John Jay College later today at The Tank in Staten Island.  CSI is in a tie atop the CUNYAC standings and will look to keep pace with the top of the table today.

CSI vs. JOHN JAY COLLEGE
Matchup: College of Staten Island (9-7, 7-1 CUNYAC) vs. John Jay College (6-9, 3-4 CUNYAC)
Where: The Tank – 2800 Victory Boulevard, Staten Island, NY
Ticket Info:  $5 – General Admission; FREE – CSI Students, Faculty & Staff
All-Time Series: CSI leads, 56-12
Last Meeting:  December 2, 2017 – CSI won 77-63
Players to Watch (CSI): CSI continues to be led by sophomore peair Christian Taylor and Adeola Latunji.  Taylor tops all with 15.8 points per game and is second with 5.3 rebounds per game.  His sharpshooting has resulted in a 57.6% clip from the field.  Latunji is close behind with a 15.3 average per contest and leads the team with 5.8 rebounds per game.  Stephen Flagg erupted for a career-high 22 points against Brooklyn College on Wednesday, lifting his average up to 8.5 points per game.  Ray Savage continues to lead the team with 26 three-pointers and is second on the team with 51 assists.  Robert Rossiter is also a deep threat, and is averaging 9.2 points per game, adding in 4.6 rebounds per averaging 20.9 minutes per game.
Players to Watch (JJC): The Bloodhounds have four players averaging over double-figures, led by Hakeem Animashaun, who is averaging 17.2 per contest as one of the CUNYAC’s highest scorers.  He is also second on the squad with 6.3 rebounds per contest.  Essien Epps in next in tow with 13.8 markers per contest, placing second on the team with 41 assists this season.  Eric Sandoval, Jr. is averaging 12.7 points per game, while Doug Levy averages 10.1 points and a team high 9.0 rebounds per game.  The team’s long-range threat is Luciano Cruz-Fernandez, who has 25 three’s this season.
News & Notes: It has been a great run for the Dolphins over John Jay, as they have won the last 11 meetings in the series, a run that includes nine in a row at home dating back to 2008.  In CSI’s 11-game win streak over JJC, only two games have been decided by less than 10 points, that included a razor-tight 60-58 win by CSI in 2016 at CSI.  The Dolphins overall have won five-straight, a season-high and a career best for first-year head coach T.J. Tibbs.  After losing nine of 11 games at one point, John Jay is on a modest two-game win streak, beating Medgar Evers and York College coming into The Tank.  In the last meeting between the two schools, CSI took a 77-63 win over John Jay on the road.  JAde Spencer broke out for CSI with his first career double-double with 16 points and 11 rebounds, leading CSI in both departments.  John Jay was led by Animashaun’s 12 points, while Levy added seven points with a team-best nine rebounds.  CSI committed 24 turnovers in that game compared to JJC’s 22, but they did enjoy a robust 43-27 edge in total rebounds.