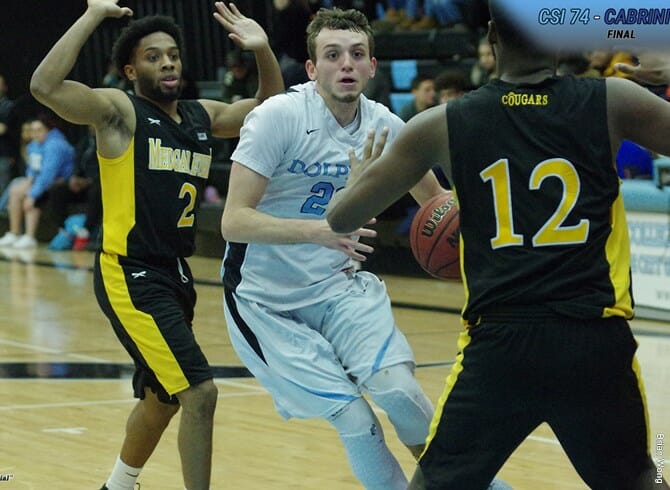 RADNOR, PA | Down nearly the entire way, the College of Staten Island men’s basketball squad nearly came back and had a chance to win at the end, ultimately falling by a field goal to Cabrini University in what was the CUNYAC-CSAC Challenge Game on the schedule, 76-74.  The home Cavaliers pushed to 18-3 overall while th Dolphins leveled to 11-11.

CSI scored on the first two baskets of the game, the second a Robert Rossiter three to take an early 5-0 advantage, but a 9-2 response by the home side, powered by two DJ Smith three’s, gave Cabrini a lead they would ultimately never relinquish at the 16:42 mark of the first half.  Down by seven early, CSI was able to parry back-and-forth with the hosts until a Deryl Bagwell lay-up gave CU a more comfortable 33-23 advantage with under five the play in the opening stanza.

The Dolphins would not go quietly, however, and baskets by four different Dolphins got the visiting side to within 33-31 before a response from Cabrini, the final one a Tyheim Monroe three, gave Cabrini a 40-34 edge going into the locker room.

A Christian Taylor bucket and an Edin Bracic three again cut the lead down to open the second frame setting the stage for another back-and-forth 20 minutes to decide the game.  After cutting the lead later to four on two occasions, Cabrini again had a firm response, using a Smith trey and Bagwell lay-up to climb back up to 57-47 with 10:16 to go.

Still, cabrini could not insert the dagger it needed to put the Dolphins away and a resilient CSI 12-2 run to tie the game up at 7:35, thanks in large part to another pair of Bracic three’s and a pair of jumpers from Adeola Latunji.  On their next trip down the floor, CSI took the lead on a Stephen Flagg jumper with 6:55 to go, and the Dolphins held the lead for about two minutes before a Keith Blassingale three wrestled it away at 65-63 with 4:54 to go.

The final two minutes would be where the game was decided.  CSI would take a critical 71-69 lead with 1:28 to go, but four consecutive free-throws gave Cabrini back the edge, and down by two with  under a minute to play, CSI would misfire on a pair of lay-ups by Latunji and Ray Savage.  The teams would trade free-throws, parrying back and forth until CSI ultimately would get a final chance down by just two following two free-throw misses by Monroe with 1.7 seconds left.  After a timeout, CSI’s inbounds pass was thwarted away and the Dolphins did not get off a final shot, ultimately falling, 76-74.

Monroe led all scorers with 29 points and 17 rebounds while teammate Blassingale fired in 15 and Bagwell 11 points and 10 rebounds.  CSI responded with 24 points from Taylor.  Flagg added 12 while Bracic finished with 11 and Latunji scored 10 points and a team-high seven rebounds.

CSI will resume their schedule on Tuesday, February 6, at 7:30pm against Hunter College in Staten Island, CSI’s final home game of the season.