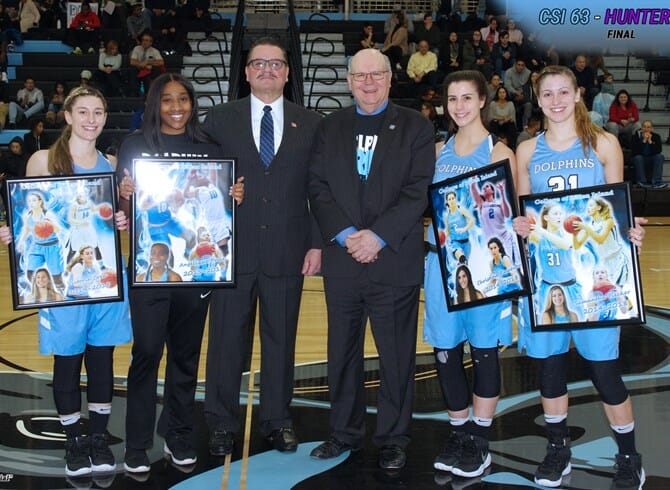 Staten Island, NY | The College of Staten Island women’s basketball team defeated Hunter College for the second time this season, completing the sweep. The Dolphins won 63-47 on Senior Night to improve to 17-5, 11-3 in the CUNYAC while the Hawks fell to 16-6, 9-4.

The Dolphins won their 17th game of the season and 11th in the CUNYAC. Staten Island currently holds the no. 2 seed with two games remaining in the regular season.

Senior Christina Pasaturo, the CUNYAC leader in scoring, recorded her third double-double of the season with 21 points and 10 rebounds while fellow senior Victoria Crea added 12 points and seven rebounds.

Staten Island led 25-12 at the half despite shooting just 27% from the field.  Hunter struggled as well, shooting 16% in the first half.  The strong point for both teams coming into the game was their 3-point shooting ability, however, both teams struggled all game finding their groove as CSI shot 5-for-23 while the Hawks sank just four of their 23 attempts.

To start the second half the Dolphins jumped out to a 7-0 run to take a 32-14 lead in a game where both teams struggled to find the bottom of the net. After Arias bounced her shot off of the glass, Cali was able to get inside off of a pass from Pasaturo to lay it in to keep the lead at double digits. Jade Aponte, Hunter’s leading scorer, was held to just five points again, however, she nearly brought the lead down to single digits at the end of the third when she cashed in on a pair of free throws.

Pasaturo pushed the lead to 18 with a 3-pointer with 5:07 remaining in the game. The Hawks would answer right back with a 3-point shot by Selina Lim as they weren’t ready to bow out of the game just yet. Theresa Leung sunk another three to bring the Hawks within 12 with 2:08 left in the game as they scored six straight points while holding the Dolphins to just one.

Holding a 14-point lead with a minute remaining the Hawks pulled their defense back after the Dolphins hit their free throws.

In the game, CSI edge Hunter 30-22 in the paint while also capitalizing on the turnovers by scoring 21 points.  Tonight’s game was riddled with turnovers as both teams combined for 52 turnovers.  Hunter was able to use their height advantage as 21 of their 42 rebounds were offensive which led to Hunter scoring 19 second-chance points.

Up next for the Dolphins is a rematch against Brooklyn College in Brooklyn, NY at 5:00 pm for a top of the table CUNYAC clash.