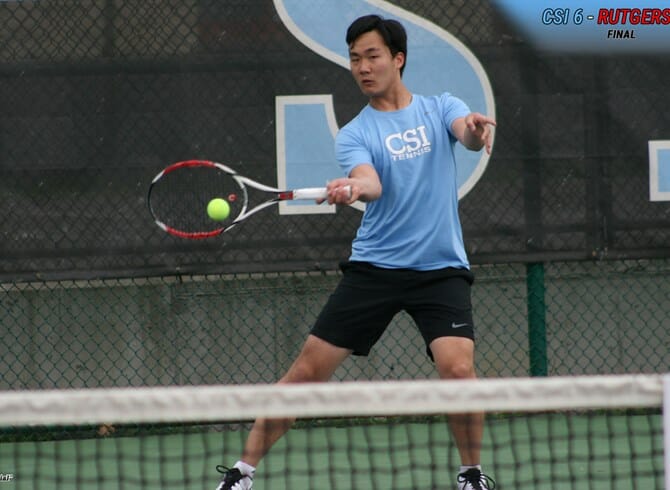 Newark, NJ | The College of Staten Island men’s tennis unit got the 2018 season underway on a positive note, posting a 6-3 win over Rutgers University – Newark at the Golden Dome Courts.  CSI will start the year at 1-0 while the Scarlet Raiders moved to 0-2.

Play started with doubles, and as they did last year, the Dolphins got off to a good start, taking a 2-1 lead after three events.  Veer Kachhiapatel and Brandon Davis were able to score an 8-2 win in the No. 1 spot for RU-Newark over CSI’s Andrew Adia and Matthew Vesci, but CSI was quick to return the favor when Raymond Hwang and newcomer David Luo scored an 8-4 win over the Raiders’ Richard Nguyen and Kevin Martin.

In the pivotal No. 3 Doubles frame, Alex Tsui and freshman Lesly DeCastro went back-and-forth but were able to an 8-6 victory over RU’s Alan Yu and and Vihang Patel.

When play came to singles, the Dolphins needed just three victories to secure an overall win, and they did one better, grabbing four right in the middle of the order.

RU-Newark scored wins at No.1 with David winning over Vesci, and at No. 6 with Patel over DeCastro.

Weather permitting, CSI will be back in action on Tuesday, when they open up CUNYAC play against John Jay College on the road at 4:30pm.