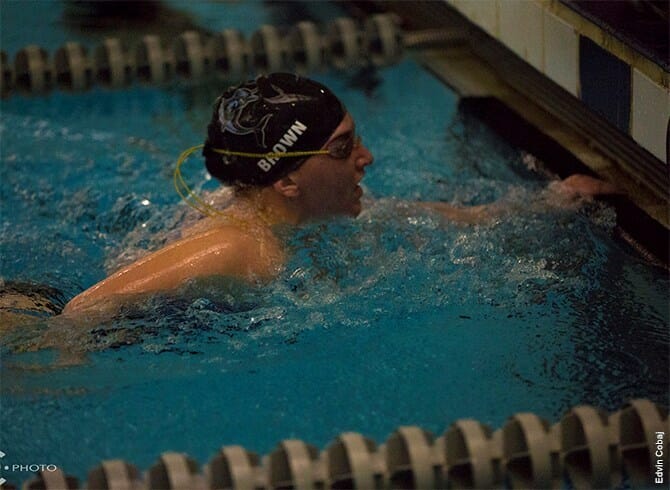 The College of Staten Island men’s and women’s swimming & diving team headed to Lehman College this afternoon to take part in the CUNYAC Championships which started at 2:00 pm.  The men look to repeat as champions for the fourth straight time while the women will look to follow suit and pick up their first CUNYAC title.

The first event of the afternoon was the 200 yard freestyle relay for the women which Staten Island took first place.  The team of Samantha Escobedo, Naomi Gaggi, Victoria Crea, and Ewa Wojciechowska came in at 1:44.10, a full second ahead of second place finishers, Baruch College.  The men were able to follow the women’s great start with a first place finish of their own in the 200 yard freestyle.  Nicholas Defonte, Jonathan Gorinshteyn, Derek Villa, and Tim Sweeney powered through the water and recorded a time of 1:28.73 a full seven seconds ahead of the next finisher.

In the 50 yard freestyle for the women, it was Staten Island dominated.  Crea and Wojciechowska put on a show and came in at one and two just .3 seconds apart from one another.  The one-two punch gave the women 19 points to help keep them near the top of the table.  For the men’s 50 yard freestyle Nicholas Defonte was in a nail-biter the whole way back and wound up tying Chris Fischer from Lehman College for second place with a time of 22.95.

The Dolphins put their diving skills on display this afternoon as Nora Abualam secured a first place finish in the 3 meter diving event with a score of 172.95 while Adil El Haddad and Ayman El Haddad packed a one-two punch for the men in the 1 meter diving event.

The Dolphins travel back to Lehman tomorrow morning to take part in the second day of the CUNYAC Championships at 9:00 am.