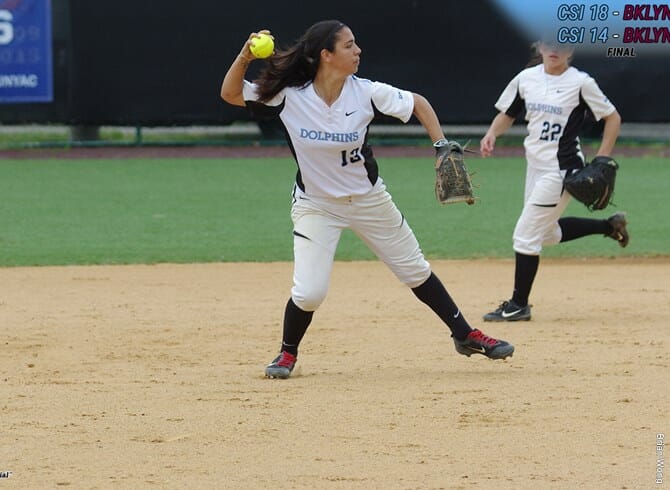 Brooklyn, NY |  The College of Staten Island softball team continued their winning ways this afternoon, lifting their overall win streak to eight games and staying perfect within the CUNYAC with a doubleheader sweep of Brooklyn College on the road.  CSI won the opener, 18-5, before powering to a 14-0 win in the second matchup.  CSI improved to 9-7 overall and 4-0 within the CUNYAC, while BC fell to 1-11, 0-4, respectively.

GAME 1 – Staten Island 18, Brooklyn 5
In the opening game, the Dolphins spread out 16 hits to gain the five-inning victory, only surrendering the final five runs after building an enormous lead.

CSI got on the board early, posting a pair of runs before Brooklyn could swing the bats. An Arianna DiBenedetto sac bunt with Antoinette Galbo on base posted the game’s first run, while Vanessa Jioia singled in Jamie Holmes, who doubled earlier in the frame.

After starter Nicolette Trapani got out of her turn in the bottom of the first, CSI essentially sealed things up with a six-run second inning to take an 8-0 lead.  Julianna Cretella got things started with an RBI-single, scoring Erica Olsen, and then Cretella scored via an error.  Patricia Riches slammed in a two-run double, and after she would come around via another error, Gabriele DeLeon knocked in another run.

DeLeon added another hit in the fourth that would score Riches to make it 9-0, and an Olsen double, chased home Jioia before a Christina Cerverizzo sac fly chased in DeLeon to give CSI an 11-0 advantage after four frames.

Twelve of the game’s 23 runs then took place in the fifth and final inning.  In CSI’s turn, the Dolphins plated seven runs on seven hits, aided along by another BC error.  Five-straight CSI hits got the scoring going, including one from Nicole Meilak and added strokes from Riches and DeLeon.

Brooklyn was able to interrupt the shutout in the fifth, scattering five hits off of CSI reliever Vanessa Porto.  A pair of the runs came unearned, as CSI committed two errors in the inning.  Breanna Maresca posted a two-RBI double in the inning to highlight the frame.

Trapani took the win, tossing three innings, yielding just a single hit while fanning nine.  Xharo took the loss for BC, yielding all 18 runs (10 earned) on 16 hits.  At the plate, CSI got three hits each from Riches, DeLeon and Olsen, and the trio combined for eight RBI and six runs scored.

GAME 2 – Staten Island 14, Brooklyn 0
In the second contest, CSI once again got started early and coasted to a five-inning finish, out-hitting Brooklyn, 9-0 while the Bulldogs committed a total of eight errors that led to seven unearned runs.

Alison Meagher, who got the start for the Dolphins, posted a no-hitter in the game, fanning eight batters, and all the offense she needed came in the first inning, when CSI rallied for three runs.

Galbo got started when she was hit by a pitch, stole second, advanced on a throwing error and then scored on a wild pitch.  Later, with the bases loaded, Meagher helped her own cause by scoring a run on a ground ball, and Jamie Holmes came in later on a wild pitch.  BC starter Brittany Lay managed to escape the inning from there, but ran into a host of trouble in the second.

Galbo doubled in Cretella to start the second and scored on an error.  Lay was then lifted in the circle for Xharo, who promptly yielded a two-RBI double to Holmes, lifting CSI to a 7-0 lead after two frames.

CSI would add five more in the third inning, highlighted by another two-RBI hit by Holmes and a bases loaded walk issued to Meilak later in the frame.

In the fourth, CSI added another two-spot, sparked by a Galbo solo homer and another bases-loaded walk to Meilak.

Holmes finished 3-3 at the dish with four RBI and two runs scored.  Galbo would end the game 2-4 with three RBI and three runs plated.

CSI will now return to the CSI Softball Complex with a eight-game win streak in hand, having now defeated Brooklyn in 15-straight matches dating back to 2012.  They will next play NYU on Sunday at 1pm for a non-conference doubleheader.