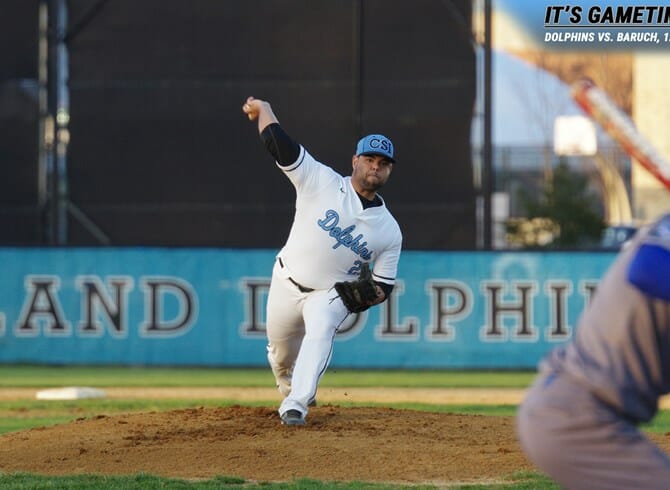 The College of Staten Island baseball program will take on CUNYAC rivals, Baruch College this afternoon at the CSI Baseball Complex.

CSI vs. BARUCH COLLEGE
Matchup: College of Staten Island (10-13, 3-2 CUNYAC) vs. Baruch College (8-14-1, 5-3 CUNYAC)
Where: CSI Baseball Complex – 2800 Victory Blvd., Staten Island, NY
All-Time Series:  CSI leads, 84-21
Last Meeting: May 7, 2017 – CSI won 6-3, 5-0
Players to Watch (CSI): John Pomarico is coming off of historic night in which he went 3-for-4 with three doubles and two RBI, one of which was a walk-off winner. On the season, Pomarico is batting .267 with seven doubles and seven RBI. Both Jett Nouvertne and Jordan Wilson are dangerous when they get on base as they have 10 steals each.  Wilson is second on the team with a .318 batting average, knocking in three runs while scoring 14 of his own. Nick Meola not only leads the Dolphins with a .338 batting average but also in RBI with 15 of them. Tom Musso paces the Dolphins with a 2.84 ERA and 34 strikeouts in 31.2 innings of work.
Players to Watch (BC): JP Ramirez has been explosive for the Bearcats, batting .400 on the year with 11 RBI and three extra-base hits. Edwin St. Hilaire is batting .274 but leads the team with 23 RBI and will look to make an impact this afternoon. Davic Capellan is a threat to steal for the Bearcats and has been successful seven times this season.  Capellan struggles in the field and has a team-high 14 errors.
News & Notes: The Dolphins have won four straight against the Bearcats which includes a pair in the CUNYAC Playoffs last season. At the CSI Baseball Complex, Staten Island is 50-8 against the Baruch all-time, winning seven of the last nine. As a team, the Bearcats are batting .281 while the Dolphins come in batting .267 on the year. Staten Island has won two of their last five games and will look to string together a pair this afternoon as the CUNYAC Playoffs is just two weeks away.