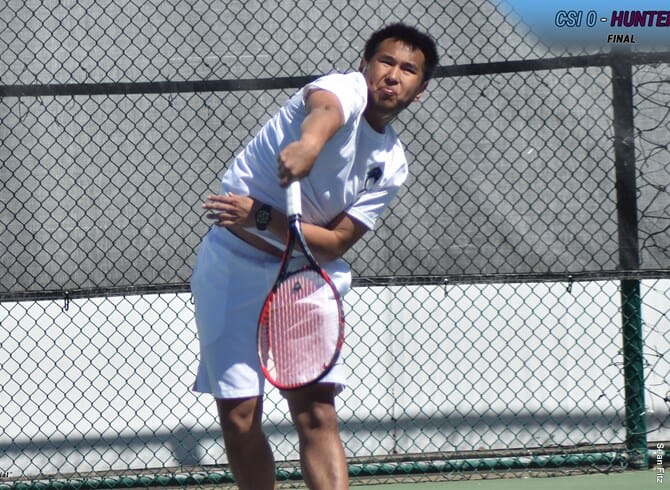 Flushing, NY |  No. 2 Hunter College proved too much for the College of Staten Island on the courts today, flying past the Dolphins, 6-0, as part of the CUNYAC Postseason Championship Semifinal round at the National Tennis Center in Flushing Meadows.  The Hawks advanced to 9-2 this season, and will meet No. 1 Baruch College in the CUNYAC Championship while the Dolphins season has finalized at 10-5.

As they did in the regular season, when they beat CSI, 8-1, Hunter got off to a great start and never looked back.  In the top spot, Nasser Ghaffar and Florimond Le Goupil Maier blasted by CSI’s team of Raymond Hwang and Matthew Vesci, 8-0, and one notch lower, at No. 2 Doubles, Sean Kemp and Joel Cantila were able to effectively side-step Andrew Adia and Alex Tsui by an 8-3 count.

During the regular season, CSI was able to take third doubles, but it was not to be this time around, as Omer Khalifa and Filip Koritysskiy were able to elevate their game and pull it out later over CSI’s David Luo and Tao Lin, 8-8 (8-6).

That gave Hunter all the momentum it needed to cruise to a win.  Le Goupil Maier at No. 3 pulled past Adia, 6-1, 6-2, and then both Ghaffar at No. 1 and Cantila at No. 4 won within seconds of one another to make it a 6-0 final.

Play is suspended once a winning team has secured victory.  At the time of the stoppage, Hunter was also prevailing on the other three courts as well.

For CSI, they will end on a 10-5 record, winning nine out of their last 10 matches heading into their semifinal tilt against Hunter.  The Hawks improved to 5-0 all-time over CSI in postseason play.