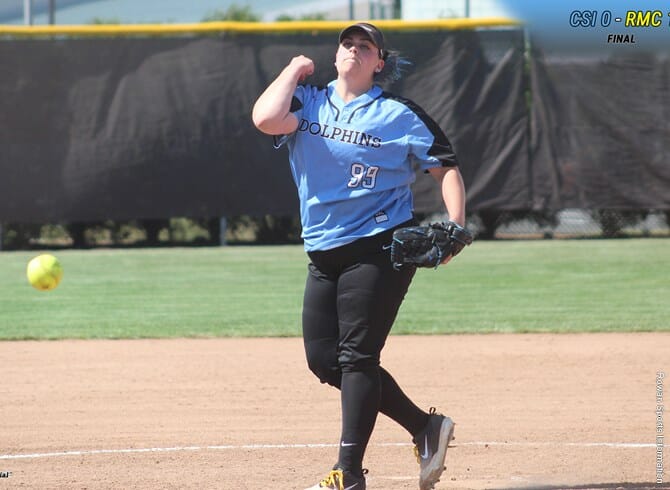 Glassboro, NJ | The College of Staten Island softball team saw their 11-game winning streak snapped today, narrowly falling to No. 5 Randolph-Macon College in the opening round of the NCAA Division III National Championship Tournament, 1-0, on the campus of Rowan University.  The Yellow Jackets improved to 39-5, advancing to the Winner’s Bracket against Penn State – Berks while the Dolphins will play host Rowan in the first elimination game of the tournament weekend tomorrow afternoon at 1:30pm.

A two-out double by Candace Whittemore in the game’ sixth inning was the difference, scoring Sarah Cimring, who had come in to pinch run for Brittany LaPrade, who led off the inning with an infield hit off of CSI starter Alison Meagher.

CSI’s closest attempt to score came in the fourth frame, when Vanessa Jioia laced a one-out single up the middle and Jamie Holmes later legged out an infield single to put two runners on.  Rhoads responded, however, inducing a Gabriele DeLeon strikeout to end the threat.  From there, Rhodes was terrific, allowing only a single hit and base runner in the final three innings.

Thanks to Meagher, CSI was just as stingy.  The junior wiggled out of a first inning jam, and allowed just three hits in the final five innings of work, two in the fated sixth inning.

For RMC, the win snapped a two-game skid the Yellow Jackets suffered to end the season, making it their first win in two calendar weeks.  It was also the first-ever meeting in school history between the two sides.

RMC will now play PSU-Berks, a 3-2 winner over Rowan University, tomorrow morning at 11:00 am.  CSI will face off against Rowan at 1:30 pm.  The loser of that game will be eliminated while the winner will play the loser of the RMC vs. PSU game in the final game of the day at 4:00 pm tomorrow.  The Regional will then conclude on Sunday.

CSI is 1-2 all-time against Rowan University.