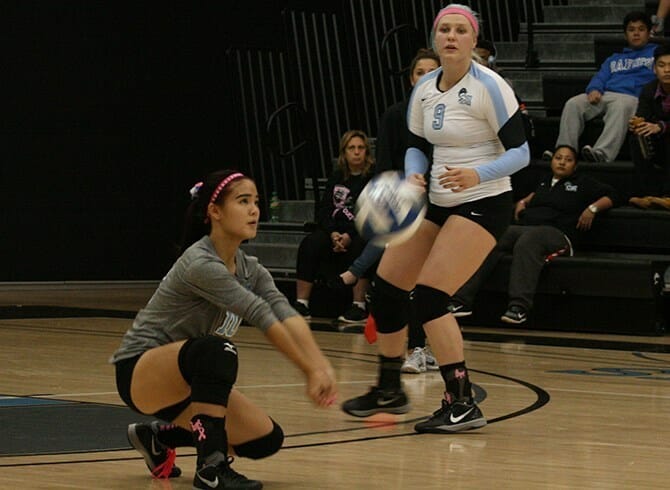 POSTGAME INTERVIEWS  The College of Staten Island women’s volleyball team salvaged in a split in the CUNYAC Multimatch held at the Sports & Recreation Center this afternoon.  The Dolphins dropped a straight set loss to Baruch College in the day’s first match, 25-13, 25-13, 25-7, before rebounding to defeat Medgar Evers College in straight sets, 25-13, 25-21, 25-12, in the nightcap.  CSI lifted its record to 7-8 overall and 2-4 in the CUNYAC with its pair of games,

In the opener CSI had a tough go of it against Baruch College.  The Bearcats led wire-to-wire in the opener, building a 5-0 lead before CSI responded with a kill by Siobhan Granich.   Later, however, the Bearcats advanced to a 16-6 advantage, helped along by a series of Dolphins errors and a McKenzie Davidson service ace.   The Dolphins rallied for three straight points in a row, but in the end, a Michelle Stommes kill gave Baruch the opening win.

The Bearcats left little to doubt in the final set, winning 25-7 and dominating the Dolphins in every capacity.  CSI played the third set without leading attacker Pola Poskrobko, who left due to injury.

It was a different story in the nightcap, as CSI was convincing with its win.  In the opening set, MEC held a modest, 8-6, lead before CSI went on a tear, going on an eventual 11-3 run to break things open, spearheaded by two Brittany Minondo aces and a pair of Granich kills.  In the second frame, the two teams traded the lead eight times.  The Cougars led by as many as four, 14-10, and later took a 21-19 lead on a Jonaldy Edouard attack error.  That was the last point they would score, however, as the Dolphins scored the last six points of the frame to take the win, guided by three Selma Kolenovic aces.

CSI made things easier in the last frame, opening up a huge, 10-1 lead, aided by three Minondo aces and a pair of Granich kills.  Minondo would add three more aces in the game before it was all said and done as CSI cruised to the win.

The Dolphins are back in action on Wednesday, when they travel to Farmingdale State for a 7pm non-conference tilt.