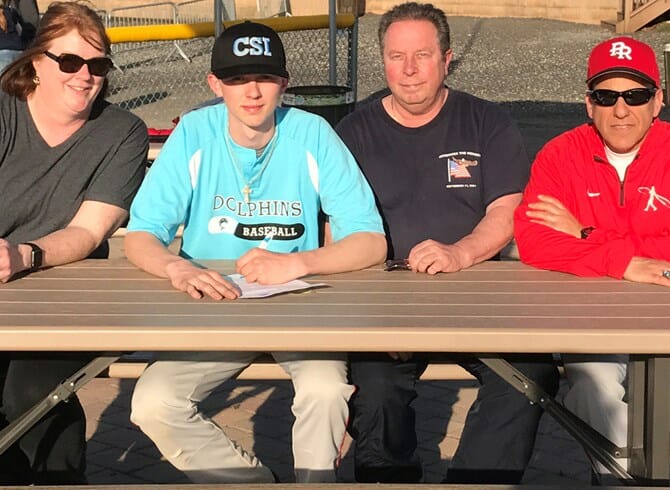 Staten Island, NY | Head Coach Michael Mauro and the College of Staten Island baseball program is proud to announce the celebratory signing of Port Richmond High School senior Eric Benedetto.  The pitcher and first baseman is expecting to complement a healthy recruiting class and the coaching staff is anxious to have the southpaw aboard.

A two-sport star with the Red Raiders, Benedetto was a bowler and a baseball team captain.   On the diamond, his primary call to duty is on the hill, where he has been hurling for Port Richmond since his freshman year, accumulating eight career victories.  Benedetto will be a part of the esteemed Macaulay Honors Program at CSI.  Also having played for the Mid Island Blue Jays for three years, he is anxious to don a CSI uniform come 2018-19.

“I chose CSI for the at-home feeling as well as the academic opportunity presented to me by the Macaulay Honors program,” he stated. “CSI has a welcoming atmosphere and the athletic staff is well-rounded and will look out for their players and their best interests.”

Benedetto’s academic accomplishments tie in hand-in-hand with his prowess on the field.  He has logged just over 100 innings of work in his career at Port Richmond, allowing only 18 earned runs in 58.2 innings pitched over his junior and senior seasons, good for a stingy 2.78 ERA.  He has also recorded an even 100 strikeouts over that same stretch, a run that included a pair of playoff appearances his junior season.  An accomplished bowler, Benedetto averaged a 177.6 game in his junior season, his most accomplished as a Raider.  Benedetto feels his finest playing days on the diamond are still very much ahead of him.

Coach Mauro agrees.  “Eric is a big, tall, and strong lefty who is very poised on the mound,” he said.  “He’s got good movement on his fastball and he’s very comfortable out there, and that’s what you look for in a recruit.  He’s a very bright, well-rounded kid and we are excited to have him be a part of our program.”

The son of Samuel and Joy Benedetto, Eric is a  member of ARISTA, and is graduating Top 10 in his senior class.  He has two older brothers, Luke and Nicholas, and a younger sister, Erin.

The CSI Baseball squad recently finished their 2018 season with a record of 18-16, finalizing the season in dramatic come-from-behind fashion to win the CUNYAC Postseason Championship, their 20th overall and fourth-straight.