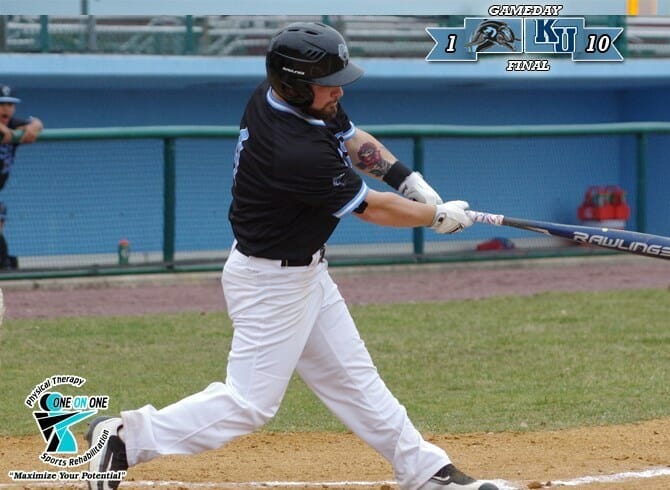 The College of Staten Island men’s baseball squad dropped their second-straight game today, falling to Kean University in a single non-conference affair in Union, NJ, 10-1.  CSI fell to 11-9 with the loss, while the Cougars lifted to 13-9.

Freshman pitcher T.J. Locatelli was able to keep the CSI bats at bay, and it took a few innings, but Kean was able to take advantage of CSI miscues and blow the game open with a four-run third and three-run fourth inning, setting the stage for the rest of the game.

After Locatelli stormed through the first wave of the CSI order, Kean got started in the third, using an error and a double to put two runners on for Sal Taormina, who belted in both runs on a single of CSI starter Tom Musso.  Matt Krupa with a single that plated Taormina, and Krupa would later come around to score via CSI’s second error of the inning and by the time the third inning was over, Musso had allowed only a single earned run but was down on the scoreboard, 4-0.

CSI touched Locatelli for two hits in the fourth but stranded a runner before Kean plated another three runs in the fourth off of CSI reliever Christian Capellan.  Ryan Reitmeyer plated one of the runs and Taormina added another RBI as well.

With both teams funneling players in and out of the game, the Cougars were able to score single runs in the next three innings, opening up a 10-0 lead before CSI broke up the shutout in the 9th inning.  Joe Palmeri doubled and after advancing to third was able to score via a Phil Ciprello groundout.

CSI will be back in action tomorrow night, hosting the United States Merchant Marine Academy in a single, 9-inning, contest at CSI, at 6:30pm.