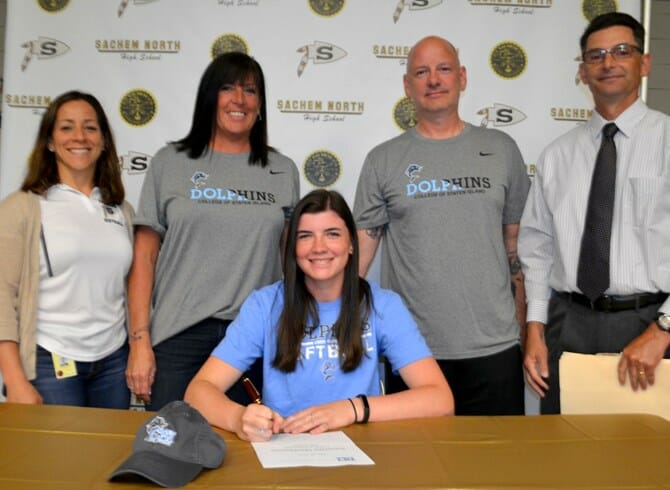 Staten Island, NY | Head Coach Stella Porto and the College of Staten Island softball program is proud to announce the celebratory signing of Sachem North High School senior Samantha McPherson.  The highly-decorated academic and athletic talent is expected to hit the ground running for the Dolphins as early as next season, adding plenty of pop to the lineup.

A varsity softball and volleyball player for the Flaming Arrows, McPherson primarily manned the shortstop and outfield positions in high school, where she was a two-time All-County player and named a Top 20 player in Long Island for the Ronkonkoma school.  She was taken in with what the College of Staten Island had to offer for her academic and athletic pursuits.

“The College of Staten Island campus is beautiful and the perfect size for me,” said McPherson, who plans to major in Education and a be a teacher post-graduation.  “It is a good distance from home, they have my major, and the course is perfect for me.”

McPherson was no stranger to the softball diamond and the Sachem varsity program, as she set the Flaming Arrows record for most games played with 99, and broke school records for hits, RBI, and doubles.  She was the team’s offensive leader for four-straight years earning All-League honors while also taking home Co-Field Player of the Year honors as well.  A member of the Chiefs Fastpitch Softball Club, McPherson looks to do whatever necessary at CSI to fill a role.

“My goal will be to bring new ideas to the program,” she said.

Head Coach Porto knows that McPherson is an exceptional player that could make a difference, and is counting down the days till the 2019 season thanks to players like her.

“Samantha has been coming to our clinics for a couple of years, and we followed up by watching her play and seeing her in action and we have been very impressed,” said Porto.  “She stands out as power leadoff hitter.  I can see her in the middle of the order and she can play anywhere.  Whatever holes we need to fill, players like Samantha can be counted on.  She is an exceptional student and a great player who will fit right into our system.”

The daughter of Sean and Kirstin McPherson, Samantha is also outstanding in the classroom, where she is a member of the Foreign Language Honor Society, National Honor Society, and the Science Honor Society.  She has a younger brother, Luke.

The Dolphins are coming off of a 23-12 season in 2018, complete with their sixth-straight CUNYAC Championship and a trip to the NCAA Division III National Championship Tournament.  The team is graduating a small cluster of seniors but is hoping to continue their reign at the top thanks to a healthy freshman class this off-season making their way in.