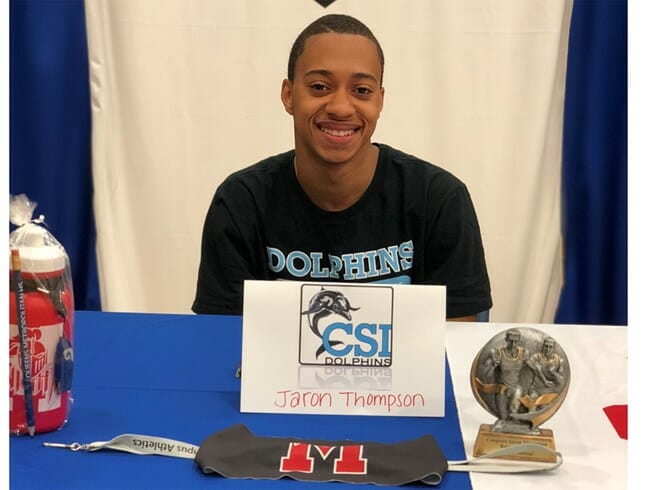 Staten Island, NY | Head Coach Jason McFall and the College of Staten Island cross-country and track & field program is proud to announce the celebratory signing of Metropolitan Expeditionary Learning School senior Jaron Thompson.  The Jamaica, NY, native, will be donning the blue and gray next season, lending depth to the cross-county squad and specializing in sprint and middle distance in time for both indoor and outdoor track and field.

Thompson is anxious to get his collegiate career underway in the classroom and on the racing circuits. He plans to major in Engineering Science at the College.

“I chose the College of Staten Island because they have the major I want to focus on that will lead me towards my career, and programs and events that I would like to try,” he said.  “Coach McFall made me feel very welcome and no matter what, he will make sure I do what I need to do to move forward. With his experience, it is an honor to run for the program at CSI.” Thompson is a former Coach’s Award winner while at MELS.  His top events were running the first leg for both the 4×100 and 4×800 events.  His ability to challenge himself to achieve better and better results are a hallmark to his racing style.  He plans to utilize that strategy especially with CSI’s new track & field program, which will debut as a varsity program in 2018-19.

“Since this is the first time CSI has indoor and outdoor track and field and the team is new, I want to set an example for athletes that want to be a sprinter or mid distance runners,”  he said.

Coach McFall is confident that Thompson can do just that, and hopes that his young sprinter will elevate both the programs in time for the upcoming season.

“Jaron will be an important piece to our newly formed sprint core group.  He has the ability to specialize from the 400-meter down and, as he arrives at CSI, we will try to add more events to his repertoire, including the 400 hurdles for outdoors or a field event,” McFall noted.  “Jaron will also be an integral part of our relays as well and will also run cross-country for the Dolphins to maximize his potential during the indoor and outdoor seasons.  He is an athletic addition to the CSI family and will have an excellent career here.”

The son of John Thompson and Sherita Levy-Thompson, Jaron has a younger sister, Khalia.

The CSI Cross-Country season gets underway this September with runs on several 8k courses leading to the CUNYAC Championship in late-October.  Winter indoor season will then follow for track and field followed by the outdoor season in the spring.