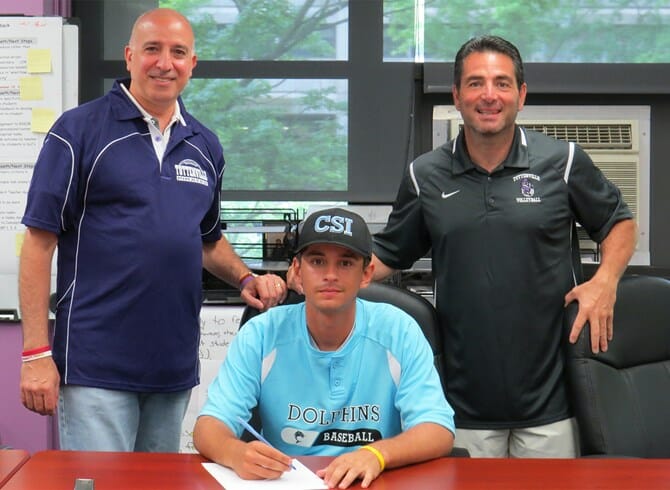 Staten Island, NY | Head Coach Michael Mauro and the College of Staten Island baseball program is proud to announce the celebratory signing of Tottenville High School senior Joe Manzi.  Entrenched at the hot corner while with the Pirates, Manzi will be expected to be a big part of the Dolphins infield this coming year and in years to come.

Manzi was happy to make CSI his school of choice.  He has been impressed with the winning pedigree and is looking forward to adding to it.

Manzi has seen his share of accolades while at Tottenville, playing almost exclusively at third base.  He was named the school’s Most Improved Player during his career as well as a Golden Glove Winner.  Manzi was also identified as a second-team all-star for the Pirates, showing that he can make it happen with the bat and the glove.

“I feel that I can impact the CSI baseball program with my glove,” he said.  “But I also feel like I can come up with clutch hits when needed.”

Coach Mauro is excited to have Manzi join a long line of 2018 recruits who will look to make immediate contributions in 2019.  “Joe is a quality third basemen with a strong arm,” he said.  “We watched him play several times in high school and we liked what we saw. He has good pop in his bat and will be a very good edition to our 2019 team.  We see a very bright future for him wearing a Dolphins uniform.”

Son of Joe and Lori Manzi, Joe has a younger sister, Samantha.  As well as his exploits at Tottenville, Manzi played for the Staten Island Orioles club program for two years.

The CSI Baseball program is coming of their fourth-straight CUNYAC Championship season in 2018.  They are bringing in one of their largest recruiting classes in history this year getting prepared to stay the course in 2019.