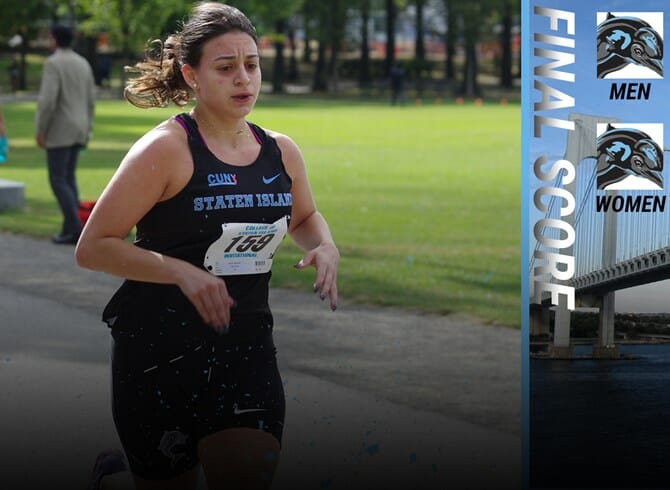 Flemington, NJ | Although official team results have not been posted as of press time, the results are in for the Ramapo College Invitational, and the College of Staten Island represented well in both the men’s and women’s race.  Both parties ran a 5K race this evening at Deer Path Park and a total of 20 CSI racers came across the line.

In the women’s race, a total of 94 entrants were on hand, and CSi was right in the mix.  The first to cross for CSI was newcomer Brittani Broderick, who crossed at 24:12, good for 58th overall in the field.  Not too far behind were both Rachel Edmunds at 24:26 and Tristiana Adragna at 24:32, good for 62nd and 63rd overall.

N’Zinga Duverney-Beavers was next to come in for CSI with a debut time of 26:15, placing her in 70th.   Rounding out the coring side for CSI was Deavion Brown, another first year standout who crossed at 28:26, coming in at 76th.

On the men’s side, the Dolphins were also represented well.  A total of 98 runners were on hand for their installment of the 5K.  Once again, it was a first-year face that came in the top spot, as Spencer Milito did the honors for CSI, coming in at 17:59, good for 43rd overall in the race.  The race time was the 9th-fastest in CSI history in the 5K.

CSI will now have nine days off until their next meet, when they travel to familiar Van Cortlandt Park to race in the Baruch College Invitational on Sunday, September 9, at 10am.