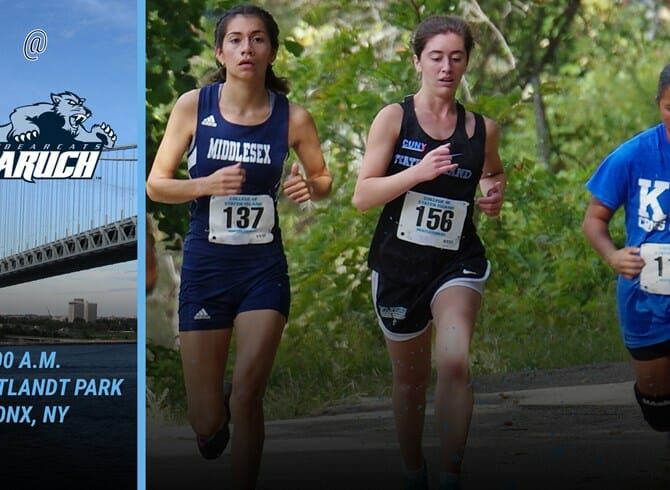 The College of Staten Island men’s and women’s cross-country teams are on a nine-day layoff and will get back to action this morning as part of the Baruch College Invitational at familiar Van Cortlandt Park in the Bronx.  The women will race at 9am, followed by the men at 10am.  The race is the first of three CUNYAC Invitationals that will take place at Van Cortlandt Park this season for the Dolphins.

CSI @ BARUCH INVITATIONAL AT-A-GLANCE
Race: Women’s 6K at 9:00 am; Men’s 8k at 10:00 am
Where: Van Cortlandt Park, Broadway and Vancortlandt Park S, Bronx, NY
Last Year’s Result:  Did Not Attend
Runners to Watch (CSI): CSI was led last week by Brittani Broderick, a freshman runner who came in at 24:12 in Ramapo’s 5k last week.  It was tops among the CSI runners and it earned her the CUNYAC Rookie of the Week honor this past week.  Rachel Edmunds also put up a great time in her CSI debut and was followed by junior Tristiana Adragna.  Over on the men’s side, the Dolphins were happy to welcome back senior Liam McMunn who posted a time of 18:29 last week in his 5k and he will look to build on that this morning.  The spotlight, however, shined on freshman Spencer Milito, who crossed at 17:59, the third-fastest 5k time in CSI history.  It was tops among the Dolphins runners and it also earned him CUNYAC Rookie of the Week honors.
News & Notes: Last year, the Dolphins did not participate in the Baruch College Invite, although they have plenty of history at Van Cortlandt Park.  This will be CSI’s first 6k run on the women’s side and their first 8k on the men’s side of the season.  The two teams did participate in this meet two years ago.  The women’s team placed 11th of 13 teams, while the men had an incomplete team and did not place.