The College of Staten Island women’s basketball squad won for the second straight time, using a persistent fast-break offense to post an early first half lead while never looking back in a 71-62 win over visiting York College as part of CUNYAC play at the Sports & Recreation Center.  The win, avenging an early-season loss to the Cardinals lifted the Dolphins to 7-14 overall and 5-6 in CUNYAC play, while York fell to 9-13, 6-4, respectively.
A Katelyn Hepworth early lay-up gave the Dolphins a 4-3 edge in the opening minutes and CSI never trailed in the first half, taking a 33-27 lead at intermission.  The Dolphins opening up their lead to as many as eight points in the frame, as both teams seemed to exchange jabs throughout the initial stanza.  York would cut the lead to a single basket on a pair of occasions but each time CSI had an answer.  A running lay-up by freshman Victoria Donegan gave CSI a 19-16 edge at 8:57, while another driving lay-up by Hepworth gave CSI a 29-25 cushion at 1:53, part of a 6-2 CSI run to close the half.  Hepworth was sensational in the opening 20 minutes, spreading out 9 points to go with 14 rebounds.
York would not go quietly, however, tying the game at 39-39 via a Maimouna Dabo three-ball with 14:39 to go.  CSI’s Allie Shanahan answered right back with a three of her own, but consecutive York baskets by Joanna Josama and Elizabeth Padilla gave York a 43-42 advantage.  CSI came right back with a 5-0 run, finalized by a Hepworth’s completion of a three-point play.
York forced another pair of ties, the last coming at 60-60 with 5:10 to play, before the Dolphins reached back for an 11-2 run highlighted by another Shanahan trey and a Hepworth lay-in to close the game at 71-62.
CSI shot a healthy 49.1% from the floor (27-55) while York could post only 34.3% (23-67).  The Cardinals were also mired in poor free-throw shooting, connecting on just 8-of-21 freebies (38.1%).  Hepworth would finish with 22 points and a career-high 20 rebounds.  Shanahan finalized with 21 points and 9 caroms.  Shadee Rice and Padilla shared the York lead with 13 points apiece, while Josama connected for 10 points and 15 rebounds.
CSI will return to action on Wednesday evening, hosting CUNYAC-rival Medgar Evers College at 5:30pm at the Sports & Recreation Center. 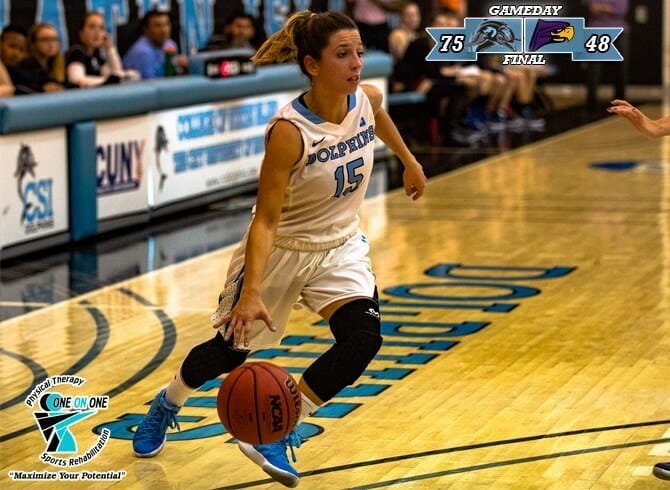