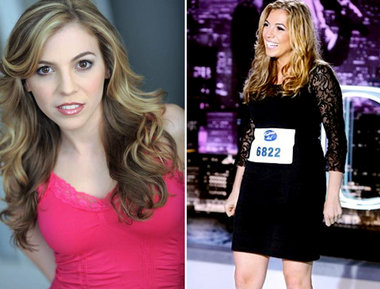 STATEN ISLAND ADVANCE – Her voice is polished and honest and can go from smoky to sassy in just a few bars of song.
Huguenot native Marissa Pontecorvo has music in her blood — as a child she performed a Haydn Concerto on piano at Manhattan’s Merkin Hall and graced stages across the country in a touring production of “Annie.” As a teen, she honed her vocal chops in Nashville.

Now the blonde 24-year-old Islander could be the next American Idol.

She doubles the chances of the borough being home to the nation’s next big musical discovery, as Annadale teen Brielle Von Hugel vies alongside her for the title on the popular Fox TV show.

“It was totally surreal, you try out 13 times to be on something and then you’re finally there. It was surreal but it could be taken away at the snap of a finger,” said Miss Pontecorvo today, before heading out to her day job teaching choral music to students at Our Lady Star of the Sea R.C. Church — her life having resumed its familiar rhythms after she returned from filming in Hollywood. “It was always a feat of mine I wanted to accomplish. It was always on my list to get on that show.

Ms. Pontecorvo, a serious musician with years of training which sets her apart from the show’s roster of golden-throated parvenus, got the ticket to Hollywood after auditioning in Pittsburgh. She appeared in snippets Thursday night, wowing the celebrity judges with her rendition of “Somewhere” from West Side Story.

“They told me I was going to Hollywood; that’s all they’ve shown so far,” said Ms. Pontecorvo, describing the October audition, that took place several months after she performed the National Anthem at the commencement ceremony of her graduating class at the College of Staten Island. “Jennifer Lopez is a huge fan of mine. She told me she loves my artistry and how I make everything my own.”

Ms. Pontecorvo said she cannot disclose how her luck held up in Tinsel Town, when she was one of 300 finalists chosen out of tens of thousands of Idol aspirants.

End result aside, the making of the popular TV show was unforgettable, she said.

“They have cameras on you at all times, the only time they’re not there is when you’re in the bathroom,” she joked about the 11 days she spent filming in Hollywood from Dec. 11 to Dec. 22. “They have you working non stop, I would wake up at 6 a.m. and wouldn’t go to bed until 4 a.m. There were challenges, group rounds; it was an intense schedule. They do that to mentally break you down to see who is fit and who is not, in a sense. For me it’s great I’m doing music.”

The Tottenville High School graduate said she will likely gather friends and family to watch the show with her in February, when the episodes that were filmed in Hollywood air.

Appearing also on the show will be her friend, another South Shore vocal stand out, Brielle Von Hugel: The 17-year-old Tottenville High School senior from Annadale is making a rare second season appearance on the show, after, last season, getting to just short of the semi-finals.
The bubbly talent auditioned in Savannah, Ga., in an episode that ran Jan. 3, and also featured her father, Bill, a former doo-wop singer. Ms. Pontecorvo, also credits her musical father as an inspiration. For two decades, his band Nightmoves has performed across the tri-state region, and now she joins at gigs as lead singer.

“I’m really good friends with Brielle,” said Ms. Pontecorvo, marveling how much the two have in common, most notably their love of performance. “We met doing karaoke on Staten Island. She’s got a great voice. I wish her the best; she’s a young talent. We both have talent.”

This story was originally published in the Staten Island Advance and on SILive.com on Monday, January 23, 2012, and is reprinted here with permission.