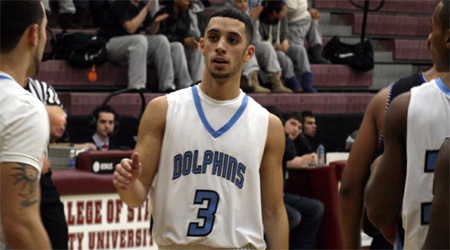 Senior Dale Taranto and the Dolphins will hope to continue their excellent run this weekend.

The College of Staten Island men’s basketball squad has traveled deeper into the 2012 NCAA Division III National Championship Tournament than any other Dolphins team before it, and on Friday, the team will travel to Lancaster, Pennsylvania, to usher in the Round of 16 with a date against national-power Massachusetts Institute of Technology on the campus on Franklin & Marshall College, at 5:30pm.  For the Dolphins it will be their first venture into the Sweet 16 in program history, and the matchup with the Engineers promises to be an entertaining one, as both teams are in prime position to make noise further into the postseason.

CSI’s sectional battle with MIT will be a part of a doubleheader at Franklin & Marshall.  At 7:30pm, Amherst College (26-2) will take on host Franklin & Marshall (27-2).  The two winning sides will meet on Saturday, at 7pm, again at the F&M campus regardless of who advances.

The Dolphins are rolling heading into the Sweet 16.  The team has won a program best 26 games, taking a 26-4 record into the contest, complete with a program best 19-game win streak.  CSI won their way into the tournament via their 12th CUNYAC Championship two weekends ago, and have set CSI single-season records for games played (31 on Friday), field goal percentage (50.2%), three-point field goals (209), and three-point percentage (41.2%).

CSI will meet an MIT team that is equally riding an impressive season.  The Engineers have dominated competition to the tune of a 27-1 overall record, complete with an 11-game win skein that included a New England Women’s and Men’s Athletic Conference title win over Springfield College, 65-60.  The team bounced Skidmore College, 62-55, in opening round NCAA play before blasting through Farmingdale State College, 83-63, this past Saturday.  The team is playing in its fourth-straight NCAA Postseason, and like CSI, has passed its all-time previous win total of 25 games.

The teams shared no common opponents this season, and this will be the first meeting all-time between the Dolphins and Engineers.  MIT is currently ranked No. 3 in the nation according to D3hoops.com and boast a No. 3 ranking as well in the NCAA Northeast Region.  CSI is one of only three unranked schools on D3hoops.com still participating in the NCAA Tournament (Scranton and Illinois-Wesleyan are the others), making them a notable underdog when the two teams face.

In the other sectional, Amherst, ranked No. 2 (D3hoops.com) will face No. 9 Franklin & Marshall, in what is sure to be another classic.  The Lord Jeffs are riding a 13-game win skein while the hosts are on an eight-game streak of their own and have the benefits of their home floor.  The two winning sides will meet the next evening at 7pm with a Final Four date on the line in Salem, Virginia, the following weekend.