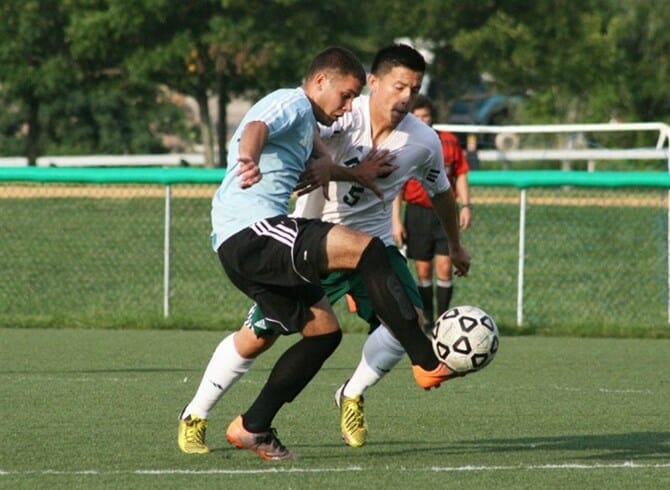 The College of Staten Island men’s soccer team netted two goals this evening but it wasn’t enough, as New York University’s Bryan Walsh posted a golden goal tally with 4:15 remaining in the second overtime, giving the Violets a 3-2 win in non-conference action played at Gaelic Park in the Bronx, NY.  The win lifted NYU to 3-0 this season, while the Dolphins fell to 0-3.

NYU claimed a big statistical advantage in this contest, but it did not prevent CSI from taking a 1-0 lead in the first half on a goal by Nicholas Bacarella, his second tally of the season.  Bacarella twisted in a shot off of a Horatio Reid pass with just 14:45 left in the initial stanza against NYU keeper Nico Cantor.  It was CSI’s first lead of the season, and it would carry into halftime, despite NYU leading in the shot department, 7-5.

Needing to press the issue offensively in a threat to respond, NYU turned off the offense in the second half and took control, out-shooting the Dolphins, 14-3, in the second stanza.  The results then showed on the scoreboard.  With just under 10 minutes gone by in the frame, Malcolm Montilus won a loose ball played in the air in the box against CSI keeper John Gioeli, and blasted it into what was an empty net to knot the score at 1-1.  With momentum on their side, NYU struck again just 45 seconds later.  A CSI turnover sprung a two-on-one breakaway for the Violets, and this time, Reece Barton took a Montilus pass and shot into another empty net after the pass beat Gioeli, and just like that, NYU had a 2-1 lead.

CSI needed an answer and received in defensively.  The Dolphins made a switch in goal, as junior Daniel Raffo entered for his first work on the season.  Raffo would make five total saves, two during the rest of the second half, as CSI clamped down defensively.  But the Dolphins also needed an equalizer, and this time, freshman Remiah Rodney answered the bell.  Rodney made quick work of an Aldair Ramirez pass at the top of the box, uncorking a shot into the top right corner of the net that beat keeper Lucas Doucette, who started the second half of play.  The goal by Rodney came with just 7:45 to play in regulation.

From there, the game stayed even, with both teams earning their fair share of chances.  The game moved to overtime, and CSI would outshoot NYU, 3-2, but alas, no chances were capitalized.  In the second frame, NYU attacked more, and after two shots that were parried by Raffo, NYU made good on their third attempt.  Walsh did it with his body, redirecting a Hector Rojas cross into the lower right corner of the net to give NYU the golden goal win as part of sudden death, 3-2.

NYU owned the final shot count, 26-12 (13-7 on goal), and held a 7-1 edge in corner kicks taken.  Both teams garnered a pair of yellow cards, as Marcin Klim and Matthew Bessler were cautioned for the Dolphins.

CSI is still seeking its first win, and will now look to score one on Saturday, when they face off against SUNY-Purchase at 2pm at the CSI Soccer Complex.