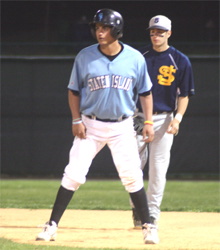 The College of Staten Island men’s baseball squad saw their five-game win skein smashed this afternoon, falling hard to visiting SUNY New Paltz by a jaw-dropping 24-1 count.  For the Dolphins, the 23-run differential tied their worst defeat in program history, when the Dolphins fell to an identical final to Salisbury State in 2005.  CSI fell to 6-4 overall, while the Hawks steadied to 4-4.

After two scoreless frames, the Hawks jumped on CSI starter Jonathan Aponte in the third inning, notching four runs on four hits and aided by a CSI error.  A Paul Merola RBI-single got things started, and three batters later, a two-RBI triple to left-center by Thomas Pinnola, gave NP a 3-0 edge.  Pinnola came around to score on a Mike Marash blast, a double down the left field line.  The Dolphins proceeded to leave two runners on base in their turn in the third, and then after a scoreless fourth frame, the Hawks erupted for six runs in the fifth inning.

Aponte was lifted in the fifth for Nick Amatucci after giving up a lead-off single and hitting a pair of batters.  With the bases jammed, Amatucci struggled to find the strike zone, walking his first two batters, sending home runs to make the score, 6-0.  Next stepped Steven Morse, who blasted a triple down the right field line, emptying the bases and giving the Hawks all the insurance it would need.

With CSI ailing on the hill, New Paltz took advantage, scoring a whopping 11 runs in the sixth inning off of 11 hits.  The inning was highlighted by two-RBI doubles by Matt Carr and Jake Cameron.  CSI hurler Matthew Schwartz was the victim, yielding nine of the runs (eight earned) before being lifted for Richard Anderson, who gave up the final two.  New Paltz would touch Anderson for three more runs in the seventh.  Morse walked in another run in the inning, part of a six-RBI day for the second baseman.

The 24 runs allowed by the Dolphins are tied for fourth-highest in CSI single-game history, but the 23-run differential in the final score tied the game for the most lop-sided CSI loss in team history, spanning 1082 games.

With no rest for the weary, CSI will look to turn the tide tomorrow afternoon when it visits SUNY Old Westbury tomorrow evening at 5pm in Long Island.