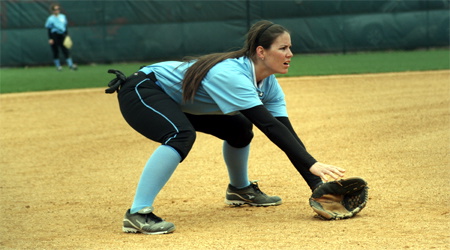 The College of Staten Island women’s softball team broke through the winning side of the ledger on Saturday afternoon taking a doubleheader sweep of visiting Lehman College in their home and CUNYAC opener of the season at the CSI Softball Complex.  CSI won the opener, 9-0 in six innings, while taking an 11-3 win in the second in five innings of play.  CSI improved to 2-6 overall (2-0 CUNYAC), while Lehman slipped to 4-8, 0-2, respectively.

Game one featured a masterful pitching performance from senior Danielle Ponsiglione, who tossed the complete game allowing only a lone hit in the fifth inning of play.  Ponsiglione allowed a walk in the sixth inning, but otherwise stayed perfect, striking out nine batters.  Meanwhile, CSI used a couple of big innings to walk away victorious.

After leaving a pair of runners on base in the first inning, CSI made the use of two errors in the second frame to score four runs (three unearned) off of Lehman starter Sheila San Andres.  First, Samantha Tallerine singled home Ponsiglione, who started the inning with a double to left centerfield.  Tallerine and Christine DeCarlo, who was hit by a pitch, would later score on an error by LC’s Janet Ortiz off of the bat of CSI’s Brittany Smith, giving CSI a 3-0 edge.  Smith would later come around to score when stealing third base and advancing on an error of the would-be throw to catch her stealing.

With Ponsiglione coasting, CSI dipped in for another three runs in the fifth inning, highlighted by a Catherine Ebro RBI-triple and an Amanda D’Amato single.  Up 7-0, CSI ended the game prematurely in the sixth inning, when Stefanie Solari laced a basehit to left field that scored Smith, who had started the inning off with an infield single, then stole second, and was advanced to third on a deep fly ball.

CSI outhit Lehman, 11-1, in the opener, and the Lightning’s six errors contributed to CSI’s total of four earned runs.

In the second contest, CSI was forced to come back from a pair of early deficits.  CSI starter Solari struggled for control early, and four first-inning walks coupled with a throwing error by the sophomore hurler gave Lehman a 1-0 edge when Natalie Martinez, who took her turn as pitcher, scored via an error.  The Dolphins were able to get out of the inning with LC leaving a pair of runners on base.  CSI then tied the game in their turn in the first off of Martinez thanks to a Solari groundout that scored Kristi Dillon, who earned her way on via another error and a stolen base.

After a blank second frame, Lehman then went up 2-1 in their turn in the third.  Martinez was plunked to start the frame, and after an Ortiz single, the two runners were moved over via a sacrifice bunt.  Martinez then scored when Ashley Williams popped up to the deep third base side.  Kaitlyn Flynn did well to catch it over the shoulder, but it allowed for Martinez to scoot in from the hot corner.

From there, however, the Dolphins exploded for runs in their turn of the third and fourth.  A Dillon RBI-single scored Victoria Procopio to knot the score, and then a Flynn triple into deep right-center scored both Flynn and Smith, and Flynn came around to score when the throw to second-base was late to get there, giving CSI a comfortable, 5-2, edge.

After an Ortiz RBI single for Lehman closed the gap to 5-3, CSI exploded for five runs in the fourth, this time aided by two Lightning errors.  Smith and Ebro hits sparked the barrage, capped with a Ponsiglione sac fly to make the score 10-3.  One inning later, CSI ended the game prematurely, when Dillon laced a single into right field that scored Maria Genovese.

CSI outhit Lehman in Game two, 10-4, and Lehman posted another 5 errors, part of 11 total on the day.

Kaitlyn Flynn was the dominating factor at the plate for the Dolphins on the entire afternoon, going 5-for-7 with three RBI and three runs scored.

CSI is back in action tomorrow afternoon at 12pm at Manhattanville College for a non-conference doubleheader. 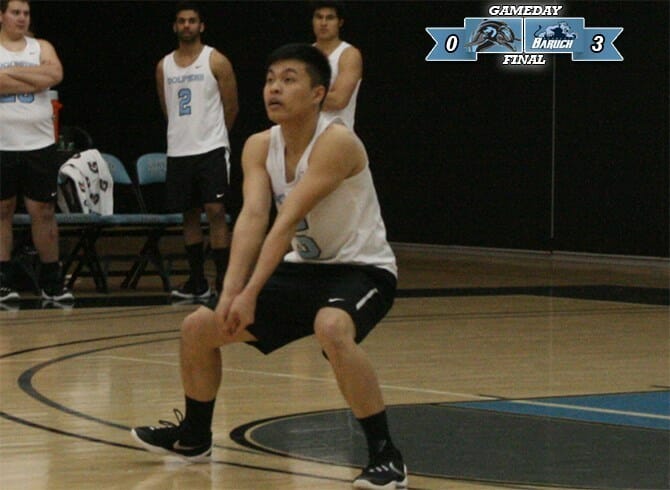