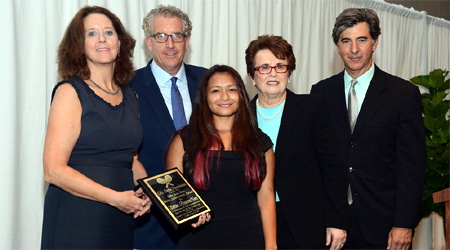 College of Staten Island freshman Sabrina Bragerton-Nasert has only been attending college courses for a couple of days, and the Stapleton native only picked up a tennis racquet four years ago, but it did not prevent CSI’s top women’s tennis recruit from taking home a prestigious Junior Honoree citation by the CityParks Foundation at its annual benefit dinner on Tuesday evening.

Sponsored by Chase, the CityParks Foundation (CPF) held their annual fundraising benefit at the National Tennis Center in Flushing on August 28, which in turn, helps CPF offer free, high–quality tennis instruction and use of equipment to over 8,000 kids at 40 parks citywide.  The CPF chose Bragerton-Nasert for her contribution to the CPF’s tennis program both on and off the court.  The CSI frosh addressed the evening’s guests at the dinner, where she was presented her award from women’s tennis legend Billie Jean King.

A part of the CPF program for the last three years, Bragerton-Nasert made use of the CPF’s free tennis instructions shortly after picking up tennis at the age of 13.  It didn’t take long for the Notre Dame Academy High School product to impress, as she later earned a spot on her high school squad at No. 3 singles.  Meanwhile, her endeavors on the court earned her invitations to the CPF’s exclusive one-day tournaments where, over the last three years, Bragerton-Nasert has shined.

In 2009, after winning the singles championship in the intermediate division for the CPF, Bragerton-Nasert received an all-expenses paid trip to London, England, to train indoors over the winter while on winter recess in high school, and the then-sophomore made the most of it, bumping her game up so that she was playing No. 1 singles for the Gators in her junior year, a position she held until her graduation in 2012.

Along the way and over the last two years, Bragerton-Nasert continued to impress with the CPF, winning a singles championship in 2010 followed by a 2011 championship in two-on-two competition, along with a pair of Chase Aces citations.  Still, her developing, on-the-court, prowess only told part of the story.  The maturing student-athlete soon began efforts outside of competition, often mentoring youth, helping with CPF events and functions, and serving as an ambassador to the sport through goodwill and sportsmanship.  That caught the eye of CPF Director Mike Silverman, who nominated Bragerton-Nasert for the prestigious honor.  A few weeks later, she received word that she won the laurel, which includes a two-day pass to the U.S. Open at the National Tennis Center.

“It’s the single most significant award that I have received,” the CSI freshman and academic scholarship recipient said after receiving her award.  “I couldn’t be more blessed.  Not a moment goes by that I don’t want to be a part of tennis and the CityParks Foundation is a big part of that.”

The accolade won by Bragerton-Nasert comes on the heels of a sensational career at NDA, where she merited a pair of Most Valuable Player and Coaches Awards at her alma mater.  The frosh is hoping that transitions to CSI, where she figures to be a dynamic piece at the top of the lineup.

“I am super excited,” she said.  “I’m looking forward to the heavier competition and improving my game and quickness.  The College has an amazing facility and it’s the kind of place where I can excel both academically and athletically.  I am definitely looking forward to helping CSI bring home a title.”

To learn more about the CityParks Foundation, log on to www.cityparksfoundation.org.  The CSI Dolphins women’s tennis team opens their season on Saturday, when they host St. Joseph’s College (Patchogue) at the CSI Tennis Center, at 1pm. 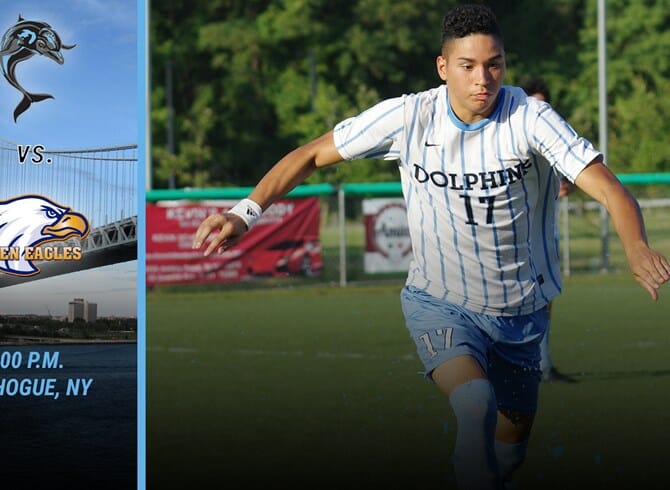