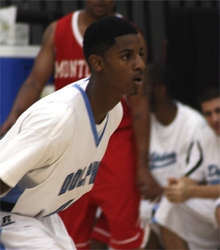 From the second he stepped off the team bus, Bloochy Magloire couldn’t miss.  The Dolphin junior went 17 of 21 from the field, including 7 of 8 from three-point range, dropping 31 points in CSI’s, 80-59, blowout of Kean this afternoon as part of non-conference play in Union, New Jersey.  The win, CSI’s second straight, moved the team to 12-3, while the Cougars fell to 6-12.

Magloire hit his first two shots, two three-pointers, to open the scoring for the Dolphins and added another 13 points in the first half.

After a collective slow start offensively, sophomore Javon Cox and Jonathan Chadwick-Myers warmed up adding 9 and seven respectively as the Dolphins took a seven point, 38-31, lead into the half.

The Dolphins picked up right where they left off in the second half.  Magloire promptly drained a three on the first possession and threw down a put back dunk off a Chadwick-Myers miss right after.

The Dolphins outscored Kean, 42-28, in the second half, easily cruising to the victory.

Magliore led all scorers with 31, while Chadwick-Myers and Cox added 19 and 15 respectively.

Allen Dantzler and Michael Burton each led Kean with 12 a piece.

The Dolphins return to action on Wednesday when they travel to York College, then to Brooklyn College on Friday as they pick up their CUNYAC slate of games.