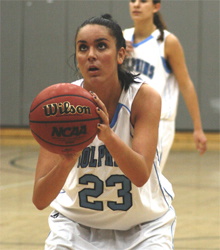 No. 2 seeded Brooklyn College used a late first-half surge to pull ahead by double-digits, then warded off several attempts at a comeback, to score a 78-66 win over No. 3 College of Staten Island in the semifinal round of the 48th annual CUNYAC/Con Edison Women’s Basketball Championship played at the Nat Holman Gymnasium at City College of New York this evening. The victory pushed Brooklyn (22-5) into the CUNYAC Final against top-seeded Baruch College on Saturday. The loss finalized the Dolphins at 16-11 overall, who will now await a possible ECAC Metro NY/NJ postseason berth early next week.

A Melanie Johnson three and a Lisa Galasso driving lay-up gave the Dolphins a quick 5-0 spurt to start the game, and another three by Megan Myhre gave CSI what would be their biggest lead of the game, 8-2, at the 16:22 point of the first frame. The Dolphins matched the lead on two more occasions, the last at 17-11 via a pair of Johnson free throws at 11:08, but from there, Brooklyn took control.

A pair of CSI turnovers turned into transition baskets for BC’s Brittany Bowen and Vanessa D’Ambrosi, starting an 11-0 run over a span of just under two minutes to shift momentum completely in the Bulldogs’ favor. CSI countered with another Myhre three that ended a 7-0 CSI run, giving CSI a modest, 24-22, edge, but it would prove to be CSI’s final lead of the game. Three-pointers by Charnelle Saint Laurent and Vanessa D’Ambrosi bookended a 9-2 run for BC, and after yet another Myhre trey reduced BC’s lead to just three, 34-31, with 2:23 to go, the Bulldogs closed on another 9-2 run to storm into the lockers with a 43-33 halftime edge, their biggest lead to that point. CSI turned the ball over three times over that stretch, ending the half shooting just 37% (10-27) to Brooklyn’s 45.7% (16-35).

A valiant Dolphins team tried several times for a comeback, but in the second frame, it was Brooklyn’s dominance in the paint and on the boards that was the difference. The Bulldogs tallied 13 second-chance points in the frame, thanks largely to a matching 13 offensive rebounds. A few decisive turns were the difference as well. Eight points by Nikki Fabozzi helped CSI reduce BC’s lead to five, 48-43, with 16:37 remaining. From there, BC would miss its next eight shots and commit a pair of turnovers, but CSI could not capitalize on their next four possessions, the most crushing of which coming on a three-pointer by Myhre that swirled out of the hoop at 14:23, and then a missed open-look lay-up by Tierno at 13:44.

Brooklyn made the most of the lull in play, ramping up a 12-2 run starting at 13:07, aided by two baskets each from Thompson and Saint Laurent to stake the higher seeds to a big, 60-45, edge with 10:48 to go. CSI would close to within eight points, 67-59, with 4:43 left and again had its chances. After a BC turnover, a would-be three by Galasso fell wide and Victoria Gallinaro failed to capitalize on another lay-up after an offensive rebound that could have dwindled the lead. BC scored the next five points to once again pull away, only this time for good en route to the 78-66 final.

Brooklyn finished the game shooting 40.6% (28-69) while CSI finished at 36.4% (20-55). The Bulldogs out-rebounded CSI, 49-33, helping them to a healthy 22-2 edge in second-chance points and a dominating 40-26 advantage in points in the paint. Thompson, D’Ambrosi, and Saint Laurent all shared the team lead with 18 points, with Bowen leading the way with 11 rebounds. For CSI, Johnson led all scorers with 20 points adding five rebounds. Nikki Fabozzi finished with 12 points and 10 rebounds before fouling out after having played 33 minutes. Galasso finished with 15 points.

Brooklyn College will advance for the second straight year to the Final against Baruch College, which scored a lop-sided, 58-34, win over No. 5 Hunter College earlier in the evening.

For CSI, they will await a possible ECAC Metro NY/NJ postseason championship berth. Selections for that are announced on Monday, February 25.