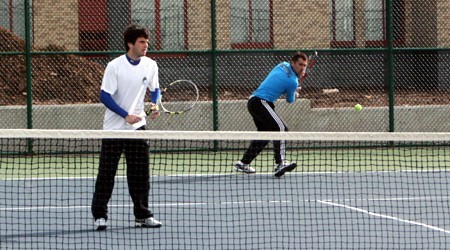 The College of Staten Island men’s tennis team scored an opening round quarterfinal win as part of the 2013 CUNYAC Men’s Tennis Championship, cruising past No. 7 Lehman College by a 6-0 count earlier this afternoon at the CSI Tennis Center.  CSI will move on to the CUNYAC Semifinals at the National Tennis Center in Flushing, NY, lifting their overall mark to 10-7.

An 8-1 winner over the Lightning in the regular season, CSI got off to another ot start today, blazing to a 3-0 lead after Doubles.  Without top player Nick Zikos, CSI went with the team of Timur Shamuradov and Dan Ursomanno in the top spot, and the Dolphins were able to score an 8-6 win over LC’s team of Caeasr Andrade and Benjamin Cirilo.  One spot down, CSI was just as good, as the team of Hector Molina and Ed Ruffe took a 8-3 winner over the visiting Ran Zhang and Alex Linde.  At the third spot, Kolachok Chuenpratum and Austin Kapetanakis scored a one-sided, 8-2 winner over Lehman’s Al Joseph Dubouzet and Gene Nakagaki.

Needing only five points to clinch victory and end the match, CSI actually got off three straight wins at almost the exact same time to actually clinch the win, 6-0.  Hector Molina at No. 2, Ursomanno at No. 3 and Chuenpratum at No. 4 all did the honors in one-sided fashion.  CSI was ahead on the score cards on the other three flights as well, winning convincingly.

CSI will now await the winner of John Jay and CCNY, who started their match earlier this evening for the semifinal round on Sunday at 1pm.  The Semifinal winners will advance to the CUNYAC Championship on Thuirsday, May 2, at 5pm, also at National Tennis Center.  In other quarterfinal matches, top-seeded Baruch defeated Brooklyn College, 5-0, and fourth seeded Hunter defeated York College, 5-1.