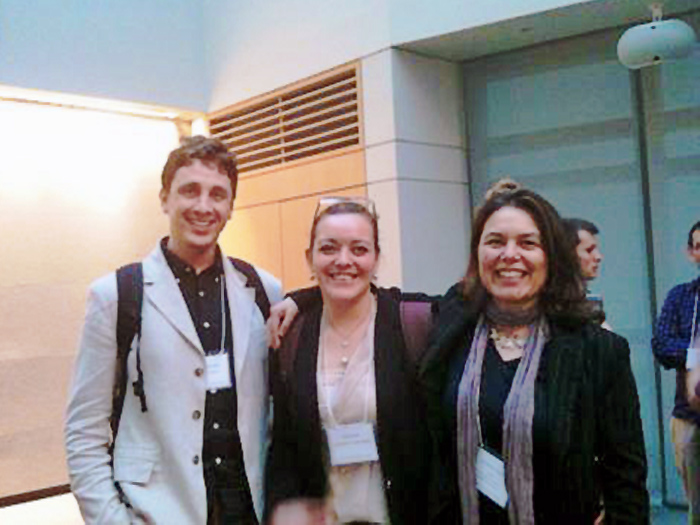 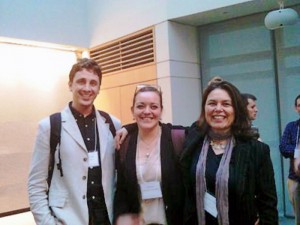 The 43rd Linguistic Symposium on Romance Languages (LSRL), sponsored by the College of Staten Island, was recently held for the first time in New York City, at The Graduate Center, The City University of New York. The symposium—the premier international academic conference geared toward linguistics in the Romance languages—was organized by CSI Professor of English Dr. Christina Tortora, and brought together the preeminent Romance linguists from all over Europe, Latin America, Canada, and the U.S.

The annual conference focuses on those languages that originally developed from Latin, of which there are hundreds spoken all over the world (including the many Italian, Spanish, Catalan, Portuguese, Occitan, French, Belgian and Romanian dialects). The program ran the gamut from discussions on parsed corpora of Portuguese dialects to the expression of “definiteness“ in French-based creoles to second-generation Latino bilinguals in New York City. The quality of the panels was as expected, as the event hosted the top research in Romance linguistics in the world.

Dr. Tortora had hoped to hold the conference at CSI, but when the decision was made to host the event at The Graduate Center, she wanted to make sure that CSI left its mark on the event, to honor the contribution of the College. In order to do that, she asked CSI Interim President Dr. William Fritz to give the opening remarks, which he did to great success.

“As a graduate student in geology/paleontology, I studied systematics and was trained in the Ernst Myer view of classification. Diagramming species relationships is not unlike parsing a sentence,” noted Dr. Fritz, referencing a quote from Charles Darwin, who was a geologist before he was an evolutionary biologist, “It may be worthwhile to illustrate this view of classification, by taking the case of languages.”

Dr. Fritz added “I know that I am treading on dangerous territory speaking to experts in the field, but my training makes me appreciate understanding origins – something I see as a possible link between our disciplines.”

President Fritz’s remarks impressed attendees from around the world, many of whom had never heard of CSI until the event. “He was sincere and reached out to us as colleagues,” said Dr. Tortora of Dr. Fritz’s remarks. “He really set the tone for collegiality and professionalism for the rest of the conference.” After the event, many attendees, such as Beatrice Santorini (an invited speaker from the University of Pennsylvania), discussed how much they “enjoyed the Dr. Fritz’s introductory remarks—especially the time (he) took to delineate the intellectual relation between geology (Dr. Fritz’s area of expertise) and linguistics.”

The event further strengthened CSI’s position as a world-class university college. “Two professors from Penn State University told me that they are now dying to come to see the CSI campus,” Dr. Tortora informed Dr. Fritz after the event.

Dr. Tortora, who also organized the 29th LSRL conference in 1999, beamed proudly at the conference’s success as it boasted a record number of submissions—nearly 180—which made the application process “very competitive,” according to Dr. Tortora. “We received well over the normal amount of papers,” she claimed.  Of the approximately 180 submissions, only 62 were given regular session presentation slots, which was also a record for the event. “The quality of papers was extremely high,” said Dr. Tortora.  “When people saw the program and the fact that it was being held in New York City, they had no choice but to attend.”

Dr. Tortora also spoke about the importance of academic conferences in general while discussing the hard work that she and her crew put in. “The academic conference is the primary factor that keeps the engine of scholarship running,” she said.  “If we didn’t have academic conferences there would not be as much research being done.” She further explained why conferences such as the LSRL are important to academics, by talking about how the exchange of ideas between colleagues is essential to “academic growth. One of the greatest services an academic can do for his or her discipline is help organize events such as these.”

Dr. Tortora, who was raised by a Colombian mother and an Italian American father, claims she was always interested in Romance languages, “It is a part of my heritage.” She is also quick to admit the main reason academics such as her work hard to organize and present at these events, “because, in addition to teaching, research is what academics are most passionate about.”

The program for the conference, including abstracts, can still be found at: http://lsrl43.commons.gc.cuny.edu/program/.