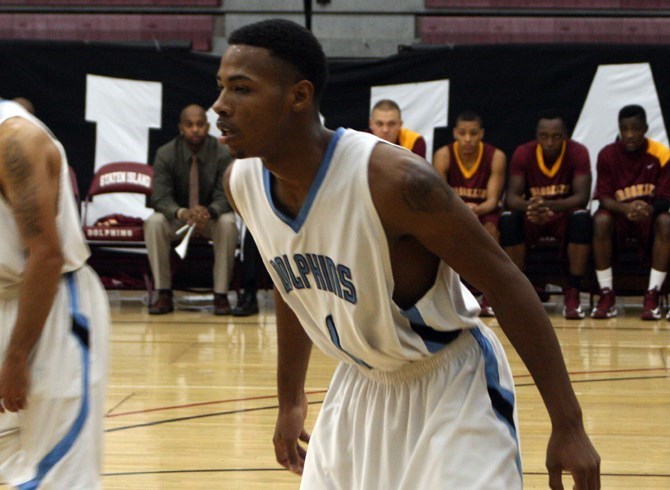 On a night when the Dolphins’ sharpshooters fell cold, the College of Staten Island men’s basketball team was able to slide by Lehman College, 86-76, as part of CUNYAC play at the Apex Sports Center in the Bronx, New York.  The Dolphins stayed perfect in CUNYAC, advancing to 12-0 in the conference and 18-2 overall.  Lehman fell to 11-10 overall and 5-7 within the CUNYAC.

Shooting over 50% from the field this season, CSI just couldn’t find their way against Lehman for the better part of the evening, and when shots were falling, CSI was plagued by foul trouble, adding to the frustration.  Still, the Dolphins were able to battle, exchanging seven lead changes with the Lightning as both teams struggled for consistency.  A three-pointer by CSI’s Jonathan Chadwick-Myers and free-throws by Javon Cox gave CSI a modest, 13-10, lead, and CSI grabbed another lead, 17-16, when Cox banked in another lay-up after Jerrome Jones gave Lehman a quick advantage.  From there, CSI never trailed in the first half.  A Bloochy Magloire dunk powered CSI to a 23-17 advantage, and later in the stanza, a three-pointer by Kevin King at 3:50, gave CSI their biggest edge, 38-31.  But the Lightning would refuse to go quietly, and as CSI went a little frigid from the field, Lehman came to within four points, 43-39, at the half.

Five straight Lehman points opened the second half, giving Lehman a 44-43 lead, and the fans got an indication that the game would come down to the wire from there.  Seven lead changes proceeded over the next three minutes, until a three-point play was completed by CSI freshman Frankie Schettino, highlighting what would be an 11-0 CSI run.  A Will Fonseca capped the run, giving CSI a 65-58 edge at 10:27.  Again, Lehman refused to quit.

A Stanley Stephens jumper knocked CSI’s lead down to 68-65 with 4:08 to play.  Needing a lift, CSI got it in the form of two three-point plays, one by Fonseca and one by Magloire via the fast break to give CSI’s its biggest advantage, 76-65 with just 3:05 to go.  CSI would only score two more field goals from there, the final one an uncontested one very late, but still, Lehman was unable to make up ground, missing a pair of crucial three-pointers and turning the ball over twice in the final minutes, giving CSI the chance to escape with an 86-76 win, despite shooting just 38.7% in the second half.

CSI shot just 42.7% for the game, connecting on just 3-of-18 shots from beyond the arc (16.7%).  Outside shooting threats Chadwick-Myers and Magloire combined to shoot just 7-26 (2-14 three-pointers).  CSI was aided by a 41-35 rebounding advantage, which included a 15-6 mark on the offensive glass, and the Dolphins forced 22 Lehman turnovers, helping the team get off 15 more shots than their opponents.

The Dolphins were led by Javon Cox’s 14 points and eight rebounds.  Fonseca poured in 13 points and seven rebounds.  Schettino was certainly a highlight, scoring 11 points while collecting six rebounds and six assists next to just one turnover in 35 minutes of action.  Kelvin Gil led all scorers for Lehman with 23 points, while Stephens finalized with 19 points.

CSI defeated Lehman earlier this season, 95-62, and have now won the last six meetings against Lehman.  In fact, the Lightning have not beaten CSI on their home floor since January 29, 2002, a 62-59 win.

The Dolphins will return to action on Thursday, February 6, at 7:30pm, when they travel to face St. Joseph’s College (Brooklyn) in their final non-conference game of the season.