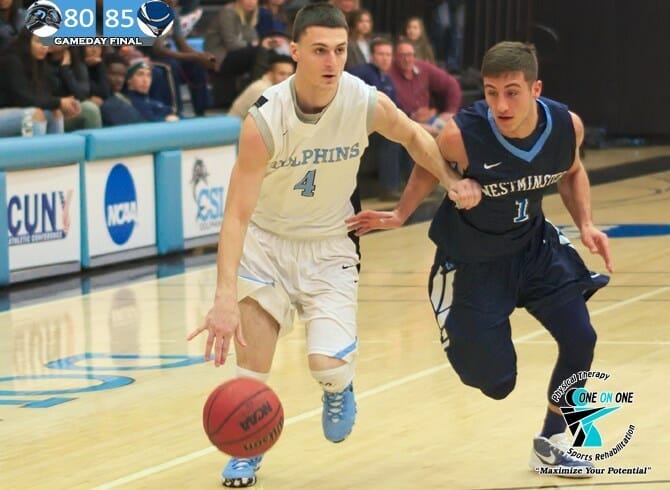 The College of Staten Island men’s basketball team finished fourth in the Optimist Tournament in Salisbury, MD after falling to Cabrini College this afternoon, 80-85.  The Dolphins open their season 0-2 after the loss while Cabrini improves to 2-1 overall.  This is the first time since the 2011-12 season that Staten Island has started 0-2.

The Dolphins held a narrow 40-38 lead at the half but a 47-point second half by the Cavaliers vaulted them to their second win of the season.  CSI shot 42.5% (34-80) from the field, 27.8% (5-18) from downtown and 7-for-12 from the free throw line. Cabrini College shot 47.6% (30-63) from the floor, 37.5% (6-16) from behind the arc and went 19-for-28 from the stripe.
Senior guard Frank Schettino once again led the way with 28 points for the Dolphins on 11-of-24 shooting.  Schettino also led the team with seven assists and was third on the team with seven boards.  Junior Edin Bracic and Senior Khaleeq Baum both tallied 13 points in the loss with Bracic converting three of his seven three point attempts and Baum collecting three steals and eight rebounds.

As a team, the Dolphins out-rebounded the Cavaliers 48-38 and assisted 11 of their 34 made baskets. Turnovers were an issue in this afternoon’s game as the Dolphins turned the ball over 16 times.

After having the score flip flop back-and-forth for the first six minutes of the game, the Cavaliers were able to get a hold on the lead after they sprinted out to an 11-point lead after an 11-0 run midway through the half.  The Dolphins however, would chip away at that lead before tying it up at 35 after a 6-0 run that was ignited by Stephen Flagg with 2:20 remaining in the half.
Down one with 20 seconds left in the half the Dolphins would have one last opportunity to take the lead heading into overtime.  Schettino would take matters into his own hands and sink a three-point shot with two seconds remaining to send the Dolphins up two into the locker room.

At the half the Dolphins edged out the Cavaliers 24-18 in the paint however it was Cabrini’s bench that outscored the Dolphins’ bench 9-4.

Holding a two-point lead at the start of the second the Dolphins would come out and extend that lead to 9 points, their largest of the game after a Bracic three-point basket. Staten Island would see their lead disappear after a 9-0 run by Cabrini to give them a one point lead over the Dolphins.

With two minutes remaining Baum converted a three point play to give the Dolphins a one-point lead with 2:41 left in the game. CSI would not be able to hold onto their lead as Cabrini went on a 6-0 run to give them the lead for the rest of the game as CSI was unable to chip away and regain control of the game.

Flagg and Schettino would both convert layup with seconds left in the game but it was too little too late.

The Dolphins will return to action on Tuesday, November 22 at 8pm against St. Joseph’s College – Brooklyn for their home opener.