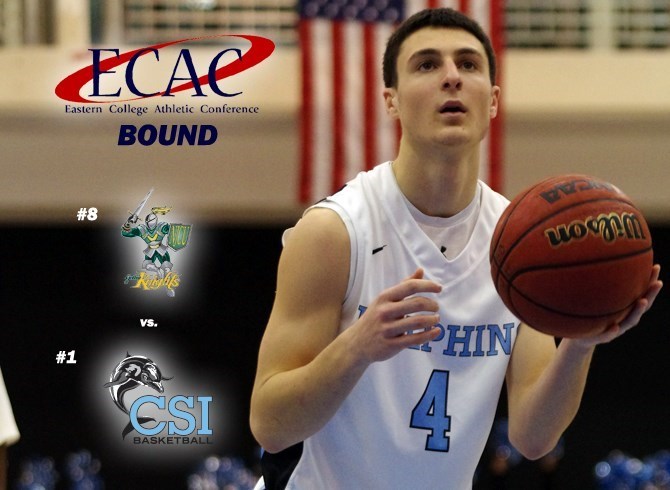 The College of Staten Island men’s basketball squad got a silver lining today, off-setting the frustration of not making the NCAA Division III National Championship Tournament, by earning the top-seed in the ECAC Metro NY/NJ Postseason Tournament, it was announced today.  The top-seeded Dolphins will host New Jersey City University, the No. 8 seed, Wednesday night at 7:30pm to usher in the festivities.

The ECAC Metro NY/NJ Tournament is an eight-team tourney that begins Wednesday and extends into semifinal and final play this coming weekend.  All legs of the tournament are played at the higher-seeded institution.  Also on Wednesday, No. 2 Rutgers – Newark takes on No. 7 SUNY – Old Westbury, No. 3 Mount Saint Mary battles No. 6 Kean University, and No. 4 Stevens Institute of Technology hosts No. 5 New York University.

For the Dolphins the ECAC berth is somewhat bittersweet.  The team was banking on an NCAA Tournament bid, after a phenomenal 25-3 regular season record and a No. 18 ranking in the D3hoops.com coming into last week.  The Dolphins, however, were tripped up by York College in the CUNYAC Final, 87-84, giving the Cardinals the automatic qualifier and sending the Dolphins on an island looking for an at-large bid, one that never came.

The Dolphins will now turn their attention to the Gothic Knights, who are a familiar face to the Sports & Recreation Center, having played in this year’s Tournament of Heroes at the College.  NJCU fell to Randolph College in the opening round of the tourney, before toppling Rivier College a day later.  NJCU finished 14-12 this season, and have been idle since an overtime loss to Kean University on February 22.