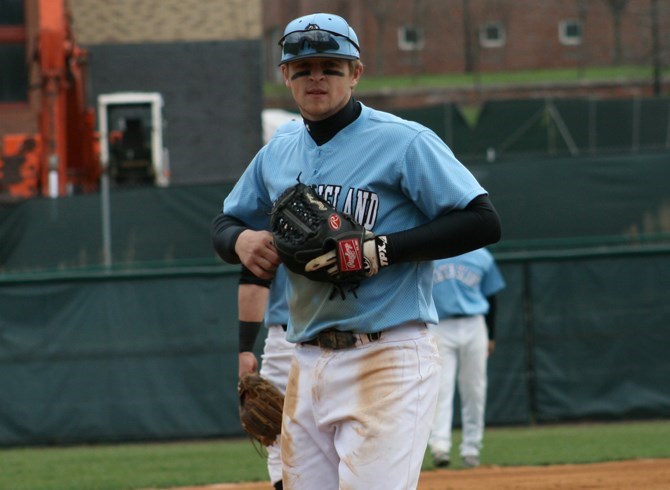 The College of Staten Island played Vaughn College today in a non-conference doubleheader at the Tomas D. Morales Field on a very Spring-like day. This game was the Warriors first ever college baseball game in school history. CSI took game one 24-0 over the Warriors, and would go on to take game two 20-0.

Josh Bernstein started game one on the mound for the Dolphins. Bernstein was able to strikeout all three batters in the first inning. This gave the Dolphins momentum going into the bottom of the first as they were able to score seven runs on four hits. Phil Ciprello would start things off when he was able to reach first on an error by the short stop which brought home Joseph Palmeri. Ciprello would go on to steal second and eventually score due to a wild pitch.

Will DiFede ripped a double deep to center field to put him in scoring position and would be driven home by a Greg Manassa single. Manassa would advance to second on a wild pitch which were abundant in this game. Chris Falcone then came to the plate and hit a single to right field to bring Manassa home. CSI scored four runs in the second inning giving them an 11-0 lead.

The Dolphins’ scoring spree would slow down in the following innings as they scored only three in the four, one in the fifth and two in the sixth.
CSI would go on to win game one 24-0.

The Dolphins only scored one run in the first inning, however they really broke the game open when they scored eight runs in the second inning to give them a, 9-0, lead over the Warriors. Manassa would start off the scoring spree by hitting a single up the middle and would advance to third by a Chris Falcone single into right field. Manassa would score on a wild pitch while Falcone would move to third. Falcone would not be stranded on third as Nick Delprete would lay down a nice sacrifice bunt that would bring Falcone home. John Baggs and Joseph Palmeri would both go onto hit doubles within that inning to extend the Dolphins’ lead.

In the third Chris Ramanauskas hit what looked like it was going to be a home run only to bounce off the fence for a two RBI double scoring two of the four runs scored within that inning.

The fifth inning was the last time that CSI would cross home plate as they were held scoreless in the sixth due to two pop ups and a grounder to the short stop who was able to make the throw to first in time.

CSI would easily win game two 20-0. With the two wins the Dolphins improve their record to 10-7 while the Warriors fall to 0-2 on the season.

The Dolphins are back in action on Tuesday, April 8th at 4:00 pm in Mahwah, NJ to take on the Roadrunners of Ramapo College.