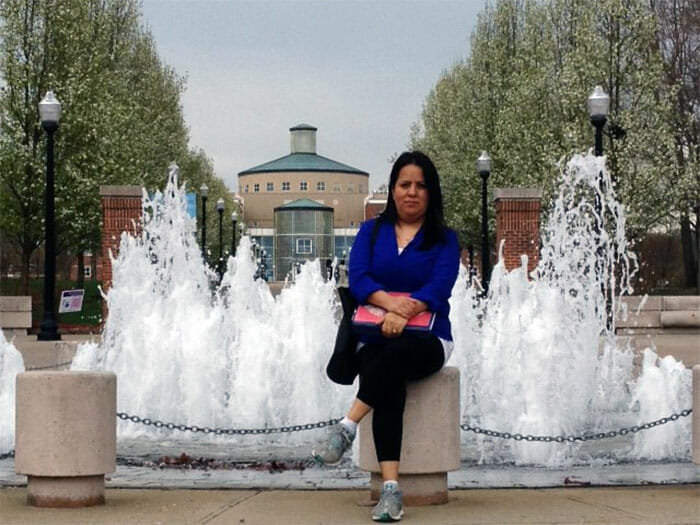 Elsa Garcia, a senior accounting major with the School of Business has traveled a long road to reach her commencement this May. In 1998 she arrived in the US from Chihuahua, Mexico, soon married, gave birth to two children, and then learned to speak English while being a full-time mom to toddlers.

Her ten-year-journey to college graduation was made possible by the many opportunities available at The City College of New York (CUNY) as well as the College of Staten Island (CSI).

In 2004, Elsa heard about the English as a Second Language (ESL) program at the Adult Learning Center, part of CSI’s Continuing Education program. After spending three semesters studying English she craved another challenge and wanted to earn her GED.

While remembering her experience preparing for the GED, Elsa practically shuddered. “It was the most difficult test in my life,” she said of the GED. “I didn’t even know what an essay was but I knew I wanted to do more than just learn English.”

After passing her GED exam she was accepted into the College Transition Initiative (the forerunner to CUNY START) at LaGuardia College where she excelled, mostly, she explained, due to the support she received from the faculty and staff. “I feel like they took my hand and taught me how to be a college student,” said Elsa of her time with the Initiative. “I was taught how to apply for college, the advisors helped me with every step—I was even given the $75 I needed to submit my college application.”

The road was not a completely smooth one however, as she failed the CUNY Reading Exam by one point.

Disappointed but not defeated, Elsa enrolled in the CUNY Learning Immersion Program (CLIP) for the summer, retook the test and scored the highest score in her cohort. In her CLIP evaluation, her instructor, Azedah Leonard called Elsa, “a student every teacher wishes to have.”

Elsa was then accepted into the Accelerated Studies in Associates Program (ASAP) at CUNY’s Borough of Manhattan Community College (BMCC) which, she claimed, “helped me in every way—it was another door.” As a result of being in ASAP, she received all the support she needed from books, advisement to Metro cards. In five years, Elsa went from a Mexican immigrant who did not speak English to a mother of two with an Associate’s Degree taking her kids for swimming lessons at BMCC.

Donna Grant, Director of the Adult Learning Center and CUNY START at CSI, responded to the theme of doors, saying, “A lot of people think all of the doors are closing on them when in reality once a door closes, another opens…Elsa understood that.”

At BMCC she made it a point to schedule classes early in the day so she could drop her kids off at school and pick them up when she was done. During Saturday classes she brought her kids with her and they took advantage of BMCC’s pool and movie theatre. “My kids enjoyed it immensely,” said Elsa of her kid’s experience on campus. “They befriended the staff and faculty—they were a big hit in the lunchroom.”

Elsa spent her time in ASAP at BMCC on the Dean’s list and graduated with her Associate’s Degree with honors. She applied to CSI and was able to transfer all of her credits and even received a scholarship through the ASAP Program, factors that Elsa calls, “Part of the Plan.”

“I noticed the difference between studying for my Associate’s and studying for a Bachelor’s right away,” Elsa admitted. “Studying is like a muscle, you have to work it out.”

At CSI, Ms. Grant, who had been tracing Elsa’s journey since the beginning offered some advice,” I told her to enjoy college,” she said. “Part of going to college is experiencing all aspects of the campus, not only the classes.” With that in mind, knowing that studying for an Accounting degree would be difficult, Elsa forged ahead but was sure to “smell the roses.” She took several art classes, studied Health Sciences, played tennis, studied music, and even became a loyal CSI basketball fan along with her children.

She was also a member of the Emerging Leaders Program for two semesters in which she volunteered her already precious time tutoring GED students in math through the Continuing Education Program.

Now, as Elsa is completing her ten-year-journey and embarks on a new one in the career of Accounting, she takes the time to appreciate her hard work and the support she received getting to this point.

“I didn’t speak any English—I started by reading children’s books,” she admitted while discussing her humble origins. “Now, I am reading books about business law and hate leaving the CSI library because I love learning so much—I would never have made it without all of the programs CUNY offers students like myself.”

Ms. Grant reiterated that’s statement, “these types of programs open doors to non-traditional students,” she said of programs such as ASAP and CUNY START. “Every year, people come into our programs with the desire to learn and we make it possible for them to achieve their dream.”

Elsa has some advice for students who like her, are not native English speakers or are full-time parents. “First off, you have to really want it because it isn’t easy,” she said of working toward a college degree. “Take it step by step, there is no rush—it took me almost ten years—but most importantly, you have to enjoy it.”