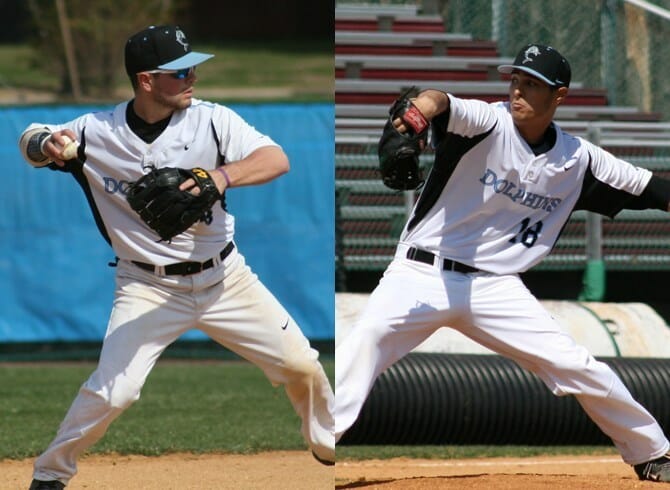 The College of Staten Island men’s baseball season finalized a pair of weeks ago, but a pair of rising stars on the team took home more honors, it was announced this week. Sophomore shortstop Joe Palmeri and left-handed hurler Chris Falcone earned on to the American Baseball Coaches Association/Rawlings All-Region third-team, representing the lone CUNYAC schools that make up the team. Associate CUNYAC-members Stevens Institute of Technology boasted a single honor on the third-team, in Jayson Yano.

Palmeri posted a stellar second season with the Dolphins, leading the squad in hitting with a .376 batting average. He made all but one start this season, leading the team in hits (41), doubles (12), walks (17), and runs scored (33). Palmeri also spread out six stolen bases and boasted a .465 on-base percentage. A stalwart in the field, Palmeri led the team with 84 fielding assists and flashed a respectable .936 fielding percentage, helping lead the team to its best fielding percentage in team history. His 218 career assists through two innings is already tied for the seventh-highest ever in CSI career history.

On the hill, Falcone was nothing short of masterful. The first-year transfer lit it up for the Dolphins, as the southpaw tallied a stellar 7-1 overall record with a 2.03 ERA. He made 10 starts for the Dolphins, going the distance four times, while posting three shut-outs through 53.1 innings, all team highs. In his lone playoff start this year, Falcone threw a perfect game through six innings, fanning 13 batters against John Jay College. For the season, opponents batted just .204 against him, and Falcone fanned a total of 75 batters next to just 12 walks.

Falcone was named the CUNYAC’s Pitcher of the Year, while Palmeri was also highlighted as a first-team CUNYAC All-Star. The Dolphins finished 19-16 this season.