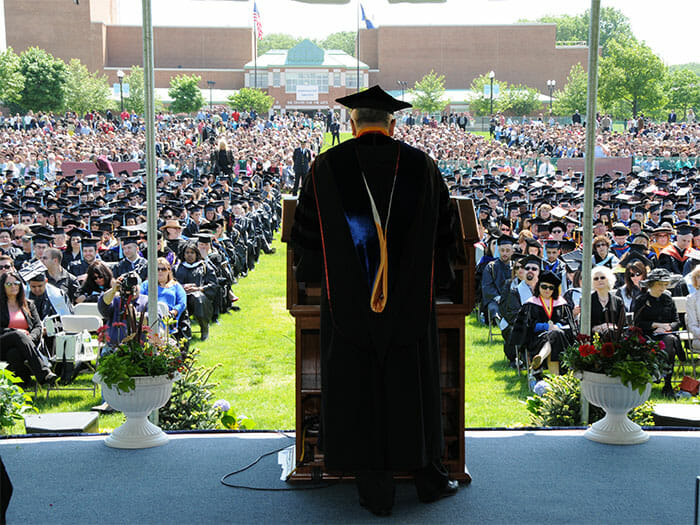 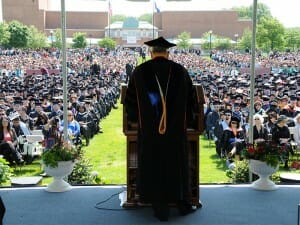 The heat that accompanied recent Commencements at the College of Staten Island took a welcome hiatus, this year, as a partly cloudy day with temperatures in the high 50s greeted the 2,375 members of the Class of 2014, and their families and supporters at CSI’s 65th Commencement on the morning of May 29.

In his opening remarks, Interim Provost and Senior Vice President for Academic Affairs Dr. Fred Naider explained that although this year’s ceremony marked the 38th Commencement since the establishment of CSI in 1976, it is actually the 65th when all of the commencements of the College’s predecessor institutions (Staten Island Community College and Richmond College) are taken into account. This readjustment of the clock represents the efforts of College President Dr. William J. Fritz and his administration to embrace the proud heritage and legacy of the only public institution of higher education on the Island.

In keeping with this new approach, legacy was the dominant theme in President Fritz’s Commencement address. He pointed to the proud legacy at CSI that the graduates had help to build, noting the recent national recognition of the College’s excellence, including Time magazine’s college ranking that placed CSI at number 48 out of 2,500, ahead of Stanford, MIT, and University of California-Berkeley; Business Insider, the prominent business and technology Website, recently choosing CSI to represent the State of New York on its list of top schools in the country; and U.S. News and World Report selecting the College as one of the Best College’s in the Northeast.

Part of that legacy, President Fritz stated, were the many recent achievements on the CSI campus and beyond, such as the opening of the Dolphin Cove residence halls; the College’s new doctoral-granting status with programs in Nursing and Physical Therapy; its new schools of Business, Education, and Health Sciences; and accolades that include three National Science Foundation awardees and a Guggenheim Fellow. President Fritz also underscored the critical and selfless support that CSI students provided to our community in the aftermath of Superstorm Sandy.

“No wonder,” President Fritz said, “Governor [Andrew] Cuomo during a visit last year called our campus ‘a jewel of the CUNY system.’ You were here. This is your great legacy.”

President Fritz concluded his remarks by paying tribute to the achievements of alumni from CSI, SICC, and Richmond College, which began with the first class of 200 from SICC in 1956, noting that people must embrace and honor the past in order to forge an effective and meaningful path to the future.

[youtube]http://www.youtube.com/watch?v=LgJpEHOCLSM[/youtube] This year’s valedictorian was Blaze Fraser, who was graduating with a Bachelor of Science Degree in Biology with a minor in Chemistry. After spotlighting the immense contribution of “secretaries, tech support, professors, and administration” to the achievements of the Class of 2014, Fraser devoted a portion of his speech to the importance of motivation to achieving success. “Without that drive inside of you,” he told the graduates, “your journey to this point is a long unsure road. Your understanding of yourself as a person and perception of what your reasons are for everything you do gives you that direction and fuels you to succeed. Many of us here today understand ourselves and our incentives more than we did before this journey began.”

Also on hand to honor the College’s newest alumni and extend their support were U.S. Senator Charles Schumer; CUNY Senior Vice Chancellor for University Relations and Secretary of the Board of Trustees Jay Hershenson; and CUNY Trustee Rita DiMartino.

In the afternoon, the tradition of honoring exceptional CSI faculty, staff, and students continued with the Annual Dolphin Awards ceremony.

– Outstanding Scholarly Achievement by a Member of the Full-Time Faculty: Soon Chun

-Outstanding Teaching by a Member of the Full-Time Faculty: Richard Flanagan

– Outstanding Service and Contribution to the College by a Member of the Full-Time Faculty: Jonathan Peters

-Outstanding Teaching by a Member of the Adjunct Faculty: Jennifer Durando

– Outstanding Service and Contribution to the College by a Member of the Non-Teaching Instructional Staff in HEO Title: Vito Zajda

-Outstanding Service and Contribution to the College by a Member of the Non-Instructional Staff in CLT and OIT Specialists Title: Aleksander Dudek

-Outstanding Service and Contribution to the College by a Member of the Non-Instructional Staff: Mary Ann Durante

-Outstanding Service and Contribution to the College by a Member of the Non-Instructional Staff in Maintenance, Operations, Security: Mary-Jeanne Hennessy

-Outstanding Service and Contribution to the College by a Member of the Part-Time, Non-Teaching Staff: Joyce Adorno

-Outstanding Service and Contribution to the College by a Currently Enrolled Student: Jesse Rodriguez

President Fritz opened the ceremony by discussing the importance of the past in shaping the future. Noting that “it is important to understand that while our Strategic Plan is necessarily forward looking—our Mission, Vision, and Values set forth in the Plan are also reflective of our traditions and legacy dating back to the establishment of the Staten Island Community College in 1956, Richmond College in 1965, the merging of institutions in 1976 creating the College of Staten Island, and our relocation to our current campus in 1993. As part of this ‘continuum’, we must simultaneously ‘reach back’ in order to ‘reach ahead’. Dr. Fritz then announced that “for the upcoming 2014-2015 academic year, we plan to be very intentional in celebrating our rich legacy.”

College Writer/Editor Terry Mares followed Dr. Fritz, reading short biographies of each of the honorees, celebrating their contributions to the College.