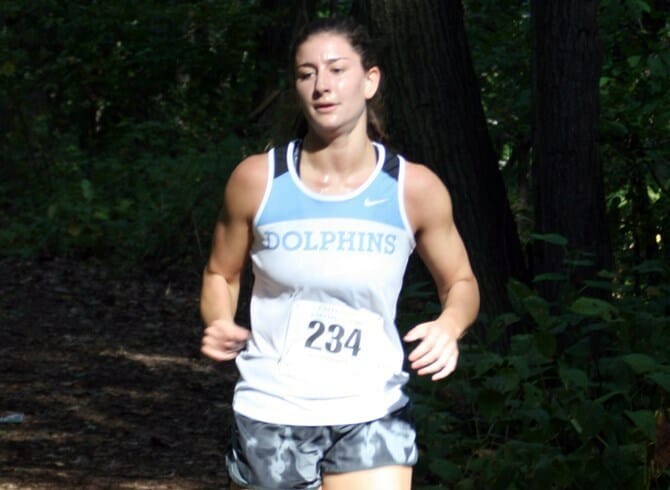 The College of Staten Island women’s cross-country team scored as a team for only the second time this season, but it was a sweet finish, as the Dolphins posted seventh among 19 teams at their very own 5K Invitational this morning at Clove Lakes Park in Staten Island.  CSI scored 209 points in the meet that was attended by 162 racers, and their score was tops among CUNYAC opponents.  St. Joseph’s College of Long Island took first overall with 28 points, followed by Fashion Institute of Technology (129) and Essex Community College (143).

Essex’s Jennaya Hield was tops overall in the field, scoring a 20:34.7 finish, she was followed by SJC-LI’s Ann Marie Zigrosser and Katie Scharrenbroich, and SJC as SJC had three of the top five and six of the top 20 overall runners to literally run away with the win.  CSI’s first finish-line crosser was Victoria Crea, as the freshman posted a quality time of 23:40.7, good for 29th overall in the field and second among CUNYAC four-year college runners.  Crea’s time was the 23rd fastest 5k time in CSI history.

Following Crea for CSI was Victoria Barry with a time of 24:48.8, good for 48th overall.  In her first collegiate cross-country race, Lisa Galasso came in right behind Barry at 24:41, placing 49th.  Also making her debut, Frances Gonzalez had in impressive 25:33.7 showing, placing 62nd in the field.  Christina Pasaturo, at 26:51.6 was next in for CSI, and rounded out the scoring side of the Dolphins’ team.