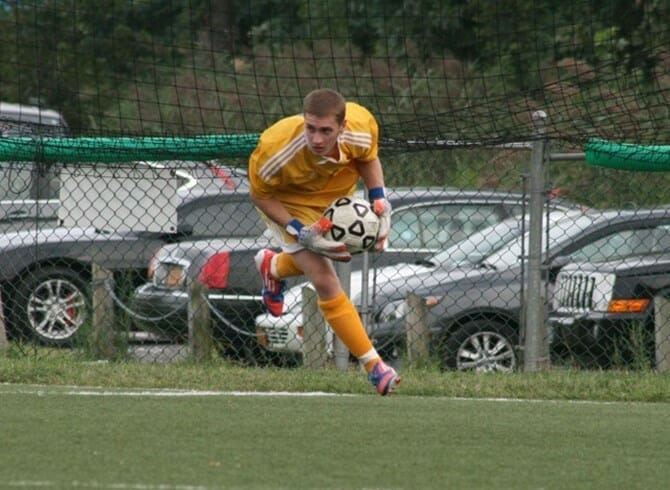 The College of Staten Island men’s soccer team’s losing skid to open their 2014 campaign hit five games tonight, as the visiting Dolphins fell to Rowan University by a 3-1 count as part of non-conference play in Glassboro, NJ.  CSI fell to 0-5 on the season, while the Profs, winning of two of their last three, improved to 2-3 overall.

Although there were a total of 27 total shots in the game, only 10 were on goal, and both teams struggled to get great looks.  Still, it was Rowan’s Travis Ward that netted two first half goals less than seven minutes apart that put Rowan in the driver’s seat.  Andres Vargas delivered a pass to the left of goal from the top of the box that Ward connected on for goal number one.  Later, at 36:44, it was Marco Fernandez’s turn to assist, this time sending in a cross from the right that Ward buried into the middle of the goal past keeper John Gioeli.

At half, Rowan led 2-0, and CSI struggled offensively, netting only a single shot on goal against RU keeper Kevin Vasta.

In the second frame, CSI got a quality break inside of 10 minutes into the frame.  A Prof foul right outside the penalty box situated the Dolphins nicely, and CSI’s Nermin Kurtesi blasted in a shot to the right of goal to cut the least to 2-1 with over 30 minutes remaining.

CSI tried in vain for an equalizer, and Dardan Nika, playing in his first action of the season, managed a pair of shots, but another pair of offsides calls on CSI frustrated the visitors, and seizing an opportunity the Profs pounced. This time Fernandez converted a Vinny Ignatowicz dross, giving RU a 3-1 lead with just 16:55 to go.  From there the Rowan defense would bolster and CSI never did off another attempt at goal.

Rowan led the final shot count, 18-9 (6-4 on goal), and held a slim, 5-3, edge in corner kicks.  After missing a game, CSI’s Ruben Diaz returned, picking up a yellow caution on the back line.  Gioeli took the loss, making a pair of saves while Vasta scored three saves in victory.

CSI will next play Farmingdale State on Monday, September 15, at 4pm in Farmingdale.