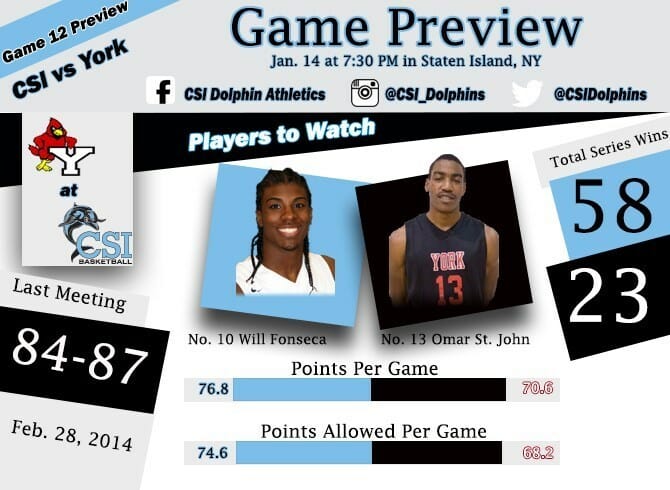 The College of Staten Island men’s basketball team is back in action tonight at 7:30 pm against York College in Staten Island, NY, at the CSI Sports & Rec Center.

The Dolphins (8-5, 4-2 CUNYAC) found their winning stride again Monday night against FDU-Florham, 81-69, after they dropped a crucial CUNYAC game to Lehman College last Friday.    Tonight, they will step on the court for a much anticipated conference game against reigning CUNYAC champs York College to seek revenge for last year’s 84-87 loss in the finals.

Despite that heart wrenching loss in the finals last season, CSI still holds the all-time series over the Cardinals 58-23 with 26 of those wins coming at the Sports & Rec Center.  The Dolphins have also won six of the last seven meetings with the last three of them being determined by five points or less.

Since the new year the Dolphins have had a packed schedule, as they have played a game every three days with two of them on the road.  2015 has been good to the Dolphins so far as they have won 3 of their last four games which was capped off by a huge 78-74 win over Brooklyn College who, at the time was first in the CUNYAC.

Junior forward, Will Fonseca has been on fire lately and leads the CUNYAC in scoring with 25 points and 12 rebounds per game.  Fonseca is shooting 48% from the floor and has improved his free throw shooting to 67% which he struggled with early in the year.  Frank Schettino leads the nation in assists per game with 8.2 and will hope he can keep that average up and find the open players in the York defense.  Thomas Delahanty has been incredibly productive over the past four games pouring in 66 points and grabbing 27 rebounds.  Delahanty will look to give support to Schettino and Fonseca with his inside presence and use his size to their advantage.

York College (9-5, 4-2 CUNYAC) has seen their share of success this season as they sit in a three way tie in the CUNYAC for third place.  The Cardinals started their 2015 year off by playing No. 5 ranked Dickinson College and losing 83-71 however they were able to bounce back against Hunter College just two games later and win 64-51.
The Cardinals offense is scoring 71 points per game while shooting 42% from the floor.  Leading that scoring charge is senior guard, Omar St. John with 19 points per game on 47% shooting.  Protecting the boards for York is senior guard, Jaron Williams who is snatching 10 boards while adding 10 points of his own per game.

Fans, if you are unable to make tonight’s you can now watch and listen to the game live at www.csidolphins.com/watch