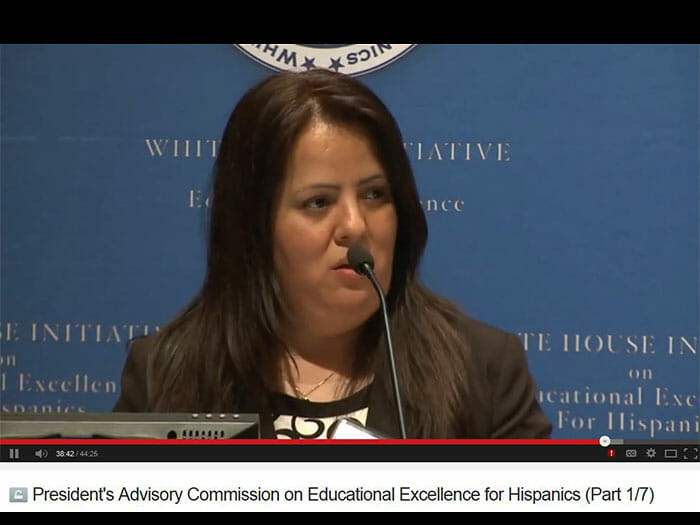 [youtube]http://www.youtube.com/watch?v=c0I5O3ddDTI[/youtube]Elsa Garcia, a 2014 graduate of the College of Staten Island, was recently a guest speaker at the White House’s second annual President’s Advisory Commission on Educational Excellence for Hispanics at the Roosevelt House in New York City. She worked alongside Luis Fraga, Co-Chair of the Higher education Committee, Alejandra Ceja, Executive Director of the White House Initiative on Educational Excellence for Hispanics, and several other White House appointees to address the needs of Latino/a students across America.

[Please scrub to 37:29 in the embedded YouTube video to see and hear Elsa’s story in her own words.]

The symposium, titled, “Postsecondary Access and Completion for All: Latinas/os in America’s Future,” was held in support of President Barack Obama’s 2020 goal of ensuring that the United States leads the world once again in having the highest proportion of college graduates.

In her remarks, Elsa Garcia, who graduated from CSI with a degree in accounting this past spring, discussed the importance of CUNY in her success. “CUNY, for me…opens many doors to possibilities, dreams, great opportunities, and of course, an education that will stay with us forever.”

She went on to tell the attendees about the challenges she faced as an immigrant and mother wanting to expand her education. “When I was in my country I did not have the opportunity to continue my education or think about going to a university because school was expensive. When I came to America, I got married and soon had two babies to take care of. I knew that I needed to learn English not only for me, but for my children. That is when I heard about the Adult Learning Center best known as Continuing Education at the College of Staten Island. There was a free program called the Adult Education Program, where I participated in ESL classes that taught me to write, speak and understand English.”

She concluded her speech by thanking her “great CUNY family who helped me in many ways with opportunities that have changed my life for the better.”

Elsa’s remarks echoed the theme of the symposium which focused on discussions about providing more Latino/a students with not only access to better opportunities to become college graduates but also with aid and incentives to remain in college once they enroll.

Ceja called the efforts of the symposium an “initiative that will help us elevate the importance of equity and opportunity for Latina/o students.” She also emphasized that the education needs to “start from the cradle” meaning that children in Latino homes need to have access to educational services from an early age.

Many statistics were cited during the panel discussions that highlighted the many challenges Latina/o students face while attending college.

The panel discussions focused on addressing the many challenges that community colleges face such as having low-income students, more remedial students and low college awareness when compared to senior colleges.

These challenges will force policy makers addressing the issue at community colleges to think of ways to incentivize college completion through performance based funding.

“Many reports were written about Latino Americans in college but then get shelved,” Luis Frago said, talking about how the Postsecondary Access and Completion for All: Latinas/os in America’s Future, symposium came about.

The Advisory Commission, which relies on the three core domains of The Community College Completion Agenda, Workforce Development and College/University Rating Systems, created the symposium as a vehicle for bringing together thought leaders, policymakers, strategists and stakeholders to openly engage in discussion and debate with the goal of providing a specific set of policy recommendations to President Barack Obama and U.S. Secretary of Education Arne Duncan.

“We were given a very different and special charge by President Obama and Arne Duncan,” Frago added. “We were told don’t write yet another report on the challenges faced by Latino Americans in colleges across the country. Instead, write a report that specifically identifies a policy agenda and specific policy proposals that can help restructure and enrich thinking in Washington D.C. as to how to better serve Latino communities across the United States.”