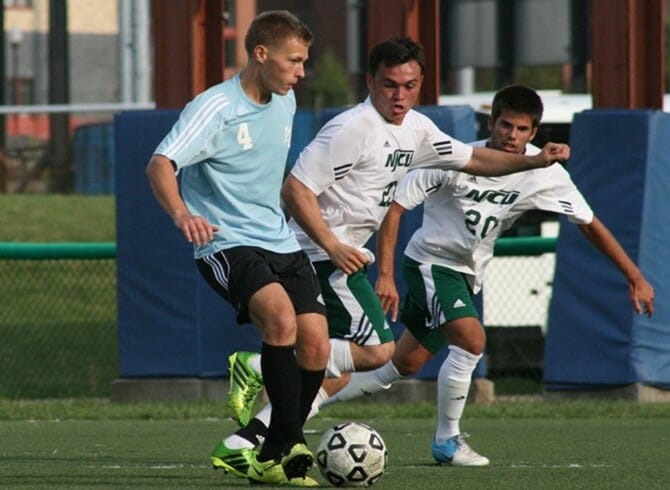 After losing the lead with 10 seconds remaining in regulation, the College of Staten Island Daniel Tsygankov scored the game-winning goal with 8:40 left in double overtime, to give the Dolphins a 4-3 victory on the road over Farmingdale State in non-conference play.  The win was the first for the Dolphins this season, lifting the team to 1-5 overall, while the Rams fell to 2-5.

Farmingdale State broke the scoreless tie only 15:09 into the contest as junior midfielder James Curley netted the pass from senior defender Vincent Danetti. Only 6:01 later, the Rams increased their lead to 2-0 on a goal by junior midfielder J.T. Famularo.

The Dolphins needed a lift and got one before the half, cutting into the lead with 9:47 left to play in the first as senior forward Alfonso Castaneda connected off of a pass from Nicholas Bacarella. Farmingdale State took a 2-1 advantage into the halftime break.

Staten Island evened the score at 2-2 in the 63rd minute of action after a Brandon Cadmen goal header completed a cross from Nermin Kurtesi. Then with just over 10 minutes to play, the Dolphins took their first lead of the game with thanks to an unassisted goal by sophomore Marcin Klim, his first tally of the season.

CSI seemed on their way to a regulation victory, but with only 10 seconds remaining in regulation, Famularo scored the game-tying goal on a header off the throw in by Anthony Leonick.  The goal stunned the Dolphins, and sent the game into overtime at 3-3.

After a scoreless first overtime, Tsygankov scored the game-winning goal for Staten Island only 1:20 into double overtime.  The junior fired a rocket in from 20 yards out passed an outstretched Robert Tucker, who made 10 stops for the Rams in defeat.  John Gioeli (Staten Island, N.Y.) stopped six shots in the win.

CSI will next take on New Jersey City University on Wednesday at 4pm on the road, before opening up the conference portion of their schedule on Saturday at home against Baruch College at 4pm.