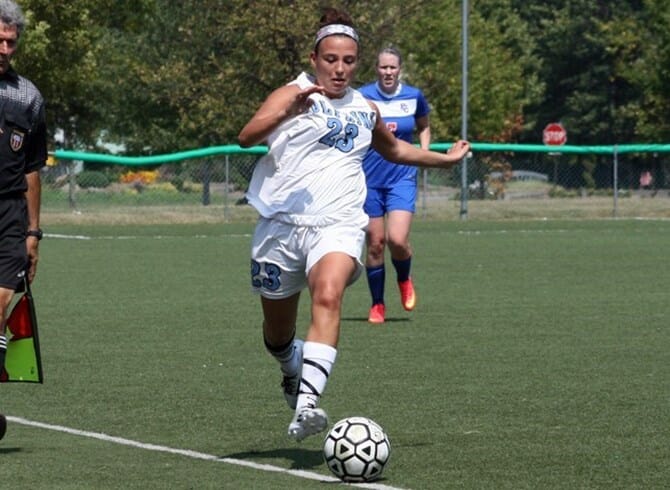 A full week into their 2014 season, the College of Staten Island women’s soccer squad scored their first victory, blanking the visiting Purchase State Panthers by a 3-0 count as part of non-conference play at the CSI Soccer Complex.  With the win, CSI advanced to 1-2-1 overall on the season, while the Panthers fell to 0-1 to open their campaign.

After a 45-minute delay to start the contest, the game got underway under extreme conditions.  With the temperature reaching nearly 95 degrees with a heat index over triple digits, the teams traded possession time, looking to scratch out opportunities at both ends.  Although it appeared that the Dolphins had the better of the runs at goal, the high-percentage opportunities were hard to come by.

CSI was able, however, to register an important opening goal at 21:11.  There, after a quick restart in play, senior Melissa Gelardi crossed in a ball from the right side and after a mad scramble in front, junior Danielle Smith was able to tuck one under Purchase keeper Briana Leon to give CSI the 1-0 lead.  It was the first goal for Smith for CSI, who suffered a season-ending injury a year ago that derailed her just two games into the season.

The score stayed dead-locked for the remainder of the half.  Possession continued to build for the Dolphins, and they closed on a 10-6 edge in shots in the frame (3-2 on goal).  Kristy Colangelo, a former Panther two years ago, made the start for the Dolphins, making a pair of saves in the first stanza.  Colangelo was tested more in the second half, as Purchase pushed towards an equalizer.  With numbers pushing up, CSI was able to get another goal via the counterattack during the early stages of the second frame.

Deanna Kvetkoff converted a Panthers turnover from 40 yards away into a pass on the wing for Gelardi, who fed a short through-ball for Danielle Alexandrini, who raced in from the right side and chipped a ball over Leon to give CSI a 2-0 lead.

At that point, CSI had a 13-6 edge in shots, but the Panthers retaliated.  The visitors began to shift the tempo, and while CSI dumped more players to the back, Purchase advanced and started to test Colangelo.  The junior keeper was up to the task, making seven saves in the second half, three of them diving stops from in-close.  CSI weathered every storm, and with time winding down, added a Senda Karagozler insurance marker with just 1:03 to go.  Karagozler tallied from the left side, again after a stellar lead from Gelardi, who scored the assist hat-trick.

The Dolphins led the final shot count, 17-15, although Purchase held the edge in shots on goal, 9-8.  Purchase held a 6-2 edge in corner kicks, and CSI committed 12 fouls to Purchase’s six, and the Dolphins’ Alexandrini was cautioned with a yellow card.

CSI will be back in action on Tuesday, September 9, 2014, hosting the College of Mount Saint Vincent at the CSI Soccer Complex at 4pm.