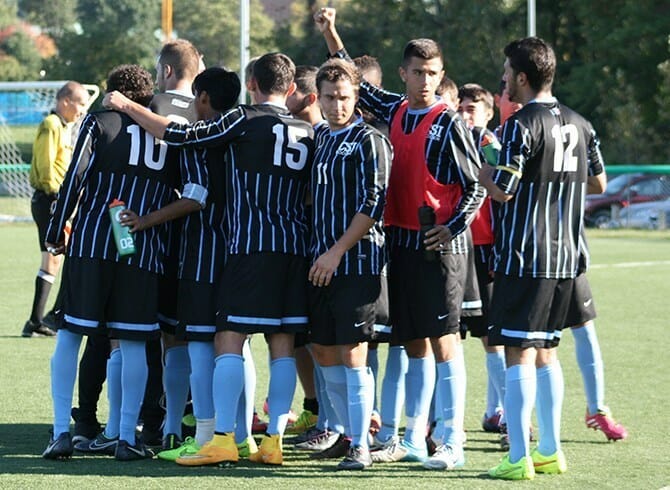 The College of Staten Island men’s soccer team hit the road to take on the Bloodhounds of John Jay College in a heated CUNYAC contest today.  The Dolphins got a lucky break 42 minutes into the first half as the Bloodhounds would score an own goal which would seal their fate as CSI would eventually go on to win 3-1 and improve their record to 8-8-1 overall and 5-1 in the CUNYAC while John Jay fell to 5-9 overall and 4-2 in the CUNYAC.

The unfortunate own goal suffered by the Bloodhounds was due to the Dolphins’ constant pressure in the final third of the field.  CSI continued to cross the ball in and rifle off shots and John Jay goalie Vitecha Kochaon was forced to make saves in the first half alone.  One surging low cross which was intended for Alfonso Castaneda was attempted to be cleared out of the box was kicked into their own net by their own defender.

Castaneda was able to put one in the back of the net in the second half on a shot from outside the box to increase CSI’s lead to 2-0 however that two goal lead would not last long as just 12 minutes later an unfortunate foul inside the penalty area led to a penalty kick goal for the Bloodhounds.  The Dolphins would quickly answer that penalty with a penalty of their own just two minutes later as Nermin Kurtesi stepped up to the spot and buried it for the last goal of the game.

The Dolphins finished the game with 23 shots and 18 of them on target while the Bloodhounds rifled off 15 shots with only 7 of them on goal.  There were five yellow cards given in this game all for the Dolphins.  CSI seemed very anxious to score as they were called offside 9 times compared to 0 for John Jay.

The Dolphins are back in action on Thursday, October 23rd at 4:00 pm, when they will take on Hunter College at the CSI Soccer Complex for their final regular season game before the CUNYAC Postseason tournament begins.