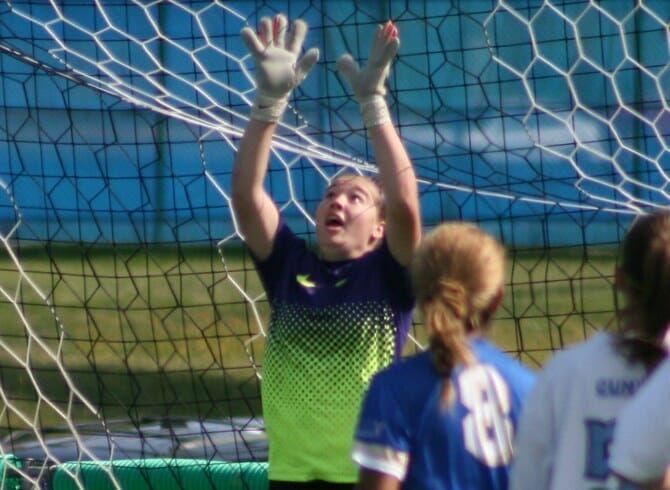 For the second time in the past three weeks, CSI senior goalkeeper Victoria Donegan took home CUNYAC Defensive Player of the Week honors, it was announced today.  The Dolphins posted a 0-1-1 week, but the senior stopper was spectacular, keeping the Dolphins afloat in both contests.

In CSI’s opening game of the week on Tuesday, Donegan made 14 saves, some of them from point-blank range in a hard-luck 1-0 loss to St. Joseph’s College (LI).  The only goal Donegan allowed was on a penalty kick in the first half, and the senior was a main reason why the Dolphins were able to stay within striking distance.  Four days later in a big match-up against Brooklyn College on the road, Donegan made 12 saves against the Bulldogs earning a shutout tie in 110 minutes of work.  The Dolphins were out-shot, 22-15, in the game.  For the season, Donegan has a 4-4-2 record with 69 saves, the fifth-highest in CSI single season history.

The tie over Brooklyn assured the Dolphins at least a tie for the Regular Season Championship and the top overall spot in the postseason when that begins in early-November.  CSI will next face off against Rutgers University (Camden) on Wednesday at 4pm in non-conference action.