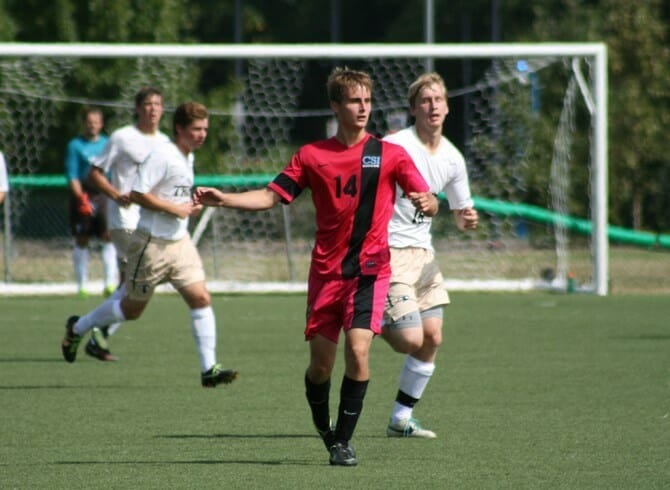 The College of New Jersey broke open a scoreless tie at halftime with two second-half goals coming off of set pieces, as they defeated the College of Staten Island in non-conference men’s soccer action, 2-0, in Ewing, NJ.  The win lifted the Lions to 4-6-2 and ended their three game slide, while the Dolphins fell to 6-7, and interrupted their three-game win streak.

In tonight’s contest, offense was at a premium the entire way, as both team struggled inside of 20 yards and possession was dominated at midfield.  Both defenses proved stout, and neither keeper was forced to make a save in the opening 45 minutes.

In the second frame, the tempo shifted in TCNJ’s favor, and the Lions controlled most of possession and made the more frequent runs up the pitch.  Still, the Lions were thwarted in their attempts at goal, and CSI keeper John Gioeli made a couple stops on routine shots in the frame.  The Lions, however, found their niche, and it came by way of the set piece.  With just a few seconds over 25 minutes to play, a CSI foul gave TCNJ a free kick from the right of the box, and Kevin McCartney delivered a short line-drive pass into the box and onto a streaking Ryan Sullivan, who headed in a strike passed a sprawling Gioeli to give the Lions a 1-0 lead.

CSI tried to press, but with numbers back, TCNJ proved to be frustrating and the Dolphins could not muster up much offense.  With time winding down, the Dolphins turned the ball over after a goal kick, and freshman Remi Rodney committed a foul and was booked, this time to the left of the goal box, giving the Lions another free kick opportunity.  This time, Domenic Polidoro delivered a cross through the box, and there to hammer it away was Michael Kassak who once again beat the CSI defense to the ball.  That put the game out of reach at 2-0, and despite their best attempts, CSI could not power up another shot on goal.

TCNJ led the final shot count, 14-9, but CSI only managed one shot on goal to TCNJ’s five.  The Dolphins had a 3-2 edge in corner kicks, but committed 14 fouls to TCNJ’s seven.

CSI is next in action on Saturday, when they face off against City College of New York at Randall’s Island, at 9:30am.