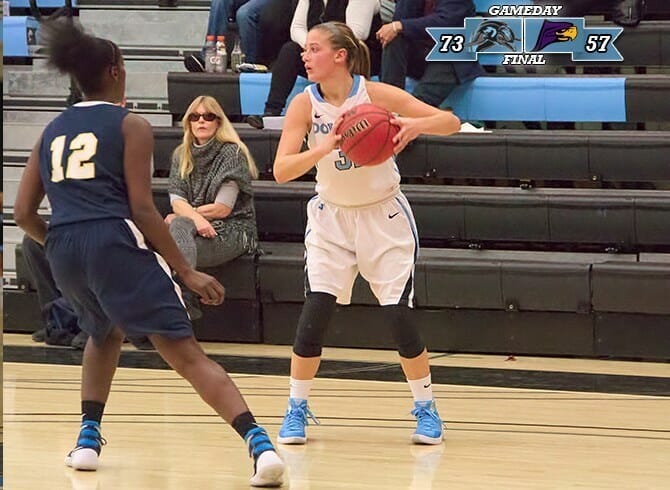 The sophomore duo once again led the Dolphins to victory as they combined for 30 of the Dolphins’ 73 points.  Christina Pasaturo finished the game with 14 points on 3-13 shooting from the field and a perfect 6 of 6 from the charity stripe.  Samantha Flecker, who was honored on the All-Tournament team at the Kean Classic led the Dolphins with 16 points on 6-11 shooting and a total of four rebounds.

Staten Island wasted no time in this game and quickly jumped out to a 14-3 lead by a pair of three-point shots from Flecker and Angelique Price.  Price poured in a career high 13 points tonight which helped the Dolphins as one of their shooters, Victoria Gallinaro, had an off night as she scored just four points on 0-11 shooting from the floor.

The women’s defense was stout in the first quarter and once again only allowed five points in a quarter for the second time this year.  The Hawks were eventually able to find cracks in the Dolphins’ defense however which allowed them to stay in the game. With a large lead after the first quarter the Dolphins continued to keep the Hawks at bay as they had an answer for just about every shot that Hunter College took.

Jamie Pifalo came out and started the second half with a deep three ball to give the Dolphins a 20 point lead. Pifalo netted five points and tallied four assists in this contest.

The Dolphins were able to use the size of Nicole Vierno and Rosa Perone and dominate the paint in scoring however their height did not translate into rebounds as the Dolphins were out rebounded in this contest 47-44.  Vierno and Perone will need to capitalize on their height moving forward as they will be a mismatch for any team that they face.

In the end the Dolphins picked up a quality CUNYAC win and will now have a long break in the action as they don’t take to the court again until December 5 when they take on St. Joseph’s College – Brooklyn.