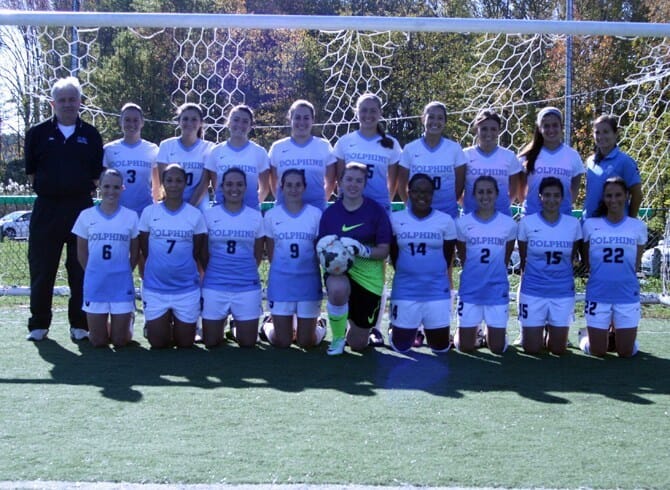 POSTGAME INTERVIEWS – For the third-straight year, the College of Staten Island women’s soccer team saw their chance at a CUNYAC Championship and automatic berth into the NCAA Division III National Championship Tournament entry end in heartbreak, falling for the second consecutive year to Brooklyn College in the Final.  Bergelie Louis’ early second-half goal was the difference, as the Bulldogs prevailed, 1-0, in front of a feverish home crowd in Brooklyn.  The Bulldogs will move on to the national tourney, boasting a record of 10-8-1, while the Dolphins season finalized at 9-8-2.

The evenly-matched sides figured to play a low-scoring game after their regular-season match ended in a scoreless draw through two overtimes.  Still, both teams had chances, making run after run, many ending defeated as both teams entered the attacking third.  Possession was dominated near midfield, with both teams parrying the ball into the other’s field of play, and then attacking the wing areas looking for crosses.

Brooklyn seemingly knocked on the door early.  An early corner kick generated one scoring chance at the eight-minute mark.  There, CSI keeper Victoria Donegan launched herself to play the ball but fumbled the ball coming down to the ground and a host of Brooklyn attackers could not push the ball across the goal line and CSI was able to finally clear.  Ten minutes later, BC sent a long ball down the wing drawing Donegan out of her net and out of the 18-yard box, but a streaking Serene Drakes for Brooklyn got there first and sent a ball into the box with CSI’s net empty.  A scurrying defense was able to draw the ball away, and when BC’s Jordan Kerwin finally got to the loose ball, she sent a ball harmlessly wide.

Weathering an early storm, CSI then took their turn dominating possession and the Dolphins almost took the lead late in the half.  Substitute Kristy Colangelo came in at the 32-minute mark and was a force at the top.  On a cross by Danielle Smith at the 35th-minute, Colangelo muscled a defender off of the ball and sent a header screaming towards the corner of the goal, but BC keeper Rebecca Harmata was there to make an extended save, preserving the scoreless tie.

For Brooklyn, halftime proved just the break the team needed.  The Bulldogs started the second stanza as if shot from a cannon, whizzing by CSI defenders and getting a couple of golden opportunities early, including an open look by Kerwin from in-close that laced wide of the net.  A minute later though, and just 1:27 into the frame, BC got the goal that made the difference.  BC leading scorer Isabelle Lalami got to a loose ball from 40 yards out and engaged in a foot race with the CSI defense.  She won the race and then sent in a cross to a streaking Louis.  Locked up with CSI defender Adriana Parello, Louis was able to win the ball when the ball got tangled in Parello’s feet, and she rocketed a shot that Donegan got a piece of but not all, and BC took a striking, 1-0, edge.

From there, BC dumped a majority of players on to their back line, and because CSI was committed to going all-out offensively, they were caught time and again short-handed in the back and BC actually had the better opportunities from there on in.  After the goal, BC actually held a 13-2 edge in shots the rest of the way, but a big reason why was due to BC’s defense tightening up in the back.

CSI had a free kick opportunity with about 30 minutes to play, but Melissa Gelardi’s would be shot sailed wide or Harmata for one missed chance.  The Dolphins next golden opportunity came on a corner kick with less than seven minutes to play.  Gelardi’s kick was well-placed but sailed just over the head of Danielle Alexandrini who was racing in on the play.  Sensing urgency, Deanna Kvetkoff sent in a bouncing shot on Harmata that the keeper was able to field cleanly at 6:34.  It would mark CSI’s last shot attempt at the game.

In a losing effort, Donegan would make a pair of sterling late-game saves, but still, BC was content at just establishing possession knocking precious seconds off of the clock.

A dejected head coach John Guagliardo was frustrated with the result but not with the team’s effort post-game.  “They played very hard,” he said after the contest.  “I thought we played very well and did what we had to do.  We had a couple of tough minutes early in the second half and our mistakes cost us.”

The Dolphins finished as CUNYAC Regular Season Champions for the fourth-straight season, but fell to 0-3-1 in their last four CUNYAC Final appearances (CSI’s 2011 CUNYAC Final Championship was won on penalty kicks.  “It’s frustrating,” said the coach, “The girls worked incredibly hard and it was a tough loss.  I’m proud of them.  We’ve shown a lot of heart all season through some tough injuries and such, and we battled very hard today.”

CSI’s season is officially over at the this point, but the team is still in the running for an ECAC Metro Postseason berth.  The team will learn of their fate on Monday, November 10.