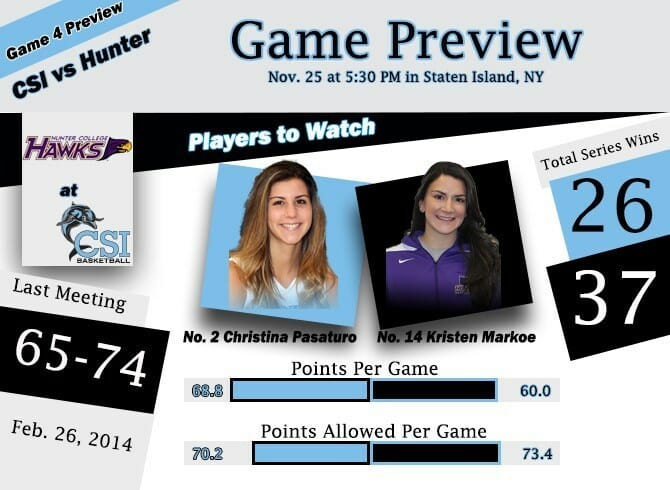 The last time these two teams met was on February 26, 2014, at a neutral site for the CUNYAC Semifinals.  The Hawks were able to defeat the Dolphins, 74-65, despite Victoria Gallinaro scoring a career high 26 points. The Hawks would move onto the CUNYAC finals where they eventually lost to Baruch College 70-54.   Hunter owns the all-time series with a record of 26-37 and has won two of the last five meetings.

Hunter College comes into tonight’s game with a 2-3 overall record.  Senior forward, Kristen Markoe, leads the Hawks in almost every offensive category as she is averaging a double-double in every game with 19.4 points per game and 11.2 rebounds per game.

Tonight is the first home game for the Dolphins as they will hope to protect the Dolphin Cove during this three game home stretch. Freshman forward, Christina Pasaturo, will be in the spotlight in her first collegiate home game as she leads the team in scoring with 14.8 points per game on 47% shooting.  Senior forward, Nikki Fabozzi, will be a strong presence in the paint and look to protect her basket and limit second chance opportunities.

Fans, if you are unable to make tonight’s game you can now follow along at our BRAND NEW Dolphins Stream www.csidolphins.com/watch for live video and play-by-play commentary!  Also, follow us on Twitter @CSIDolphins for highlights and game updates.