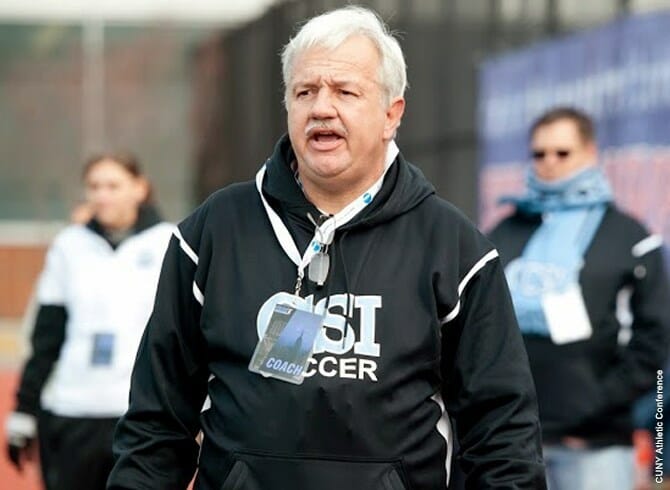 College of Staten Island women’s soccer head coach John Guagliardo, the only head coach in the program’s 11-year history, is set to retire at the close of the 2014 year, it has been announced today.  Guagliardo, whose 116 career wins are the most of any men’s or women’s soccer coach in CSI history, and rank him fourth amongst active coaches at the College across all sports, will complete his duties December 31, 2014. The College will begin to search for his replacement immediately.

“It is with sadness that I announce my retirement, effective at the end of the calendar year,” said Guagliardo.  “I am very proud of the accomplishments, and most importantly, the friends that I have acquired here over these 11 years.  Although I will miss it, I am eagerly awaiting the next chapter of my life.”

“John will be missed by our student-athletes, his fellow coaches, and every member of the CSI athletics department,” said CSI Athletics Director Charles Gomes. “He has always been very passionate about his job, he’s put in countless hours on the field and in the office, and is responsible for setting the bar for our women’s soccer program.”

Guagliardo has plenty to be proud of.  He took over the team in the fall of 2003, a year before the program began its initial varsity season.  Before even stepping onto the field, Guagliardo was part of the ground-breaking design team that introduced CSI’s FieldTurf soccer facility in 2004, he was charged with helping pilot budgeting for the program, and introduced a rigorous recruiting system before opening day on September 11, 2004.

“It was a real unique time,” he reflects on his initial days as the team’s head coach.  “We had a small cluster of interested students for soccer in 2003, and yet it was very exciting to be a part of such a ground-breaking venture for the College.  Everything was very new and fresh and although we knew that Staten Island had plenty of talent and that we could be competitive, a lot of the early years were about trial and error.  We learned a great deal, and then used what we learned to improve the program and helped develop it to what it is today, something we can all be very proud of.”

What followed for Guagliardo and his teams has been nothing short of excellent. CSI won a collective eight postseason championships, including a pair in the Hudson Valley Women’s Athletic Conference (a conference in which CSI is no longer a part of), and a total of six in the CUNY Athletic Conference.  CSI’s last postseason CUNYAC title was in 2011, but since that time the team won three-straight regular season titles, having never lost a CUNYAC regular season game over that stretch, and punched its ticket to three-straight ECAC Metro NY/NJ Postseason Tournaments.  The Dolphins finished 9-9-2 this season, complete with another ECAC bid and the school’s fifth-consecutive trip to the CUNYAC Final, amidst the backdrop of a season littered with injuries and the departure in the off-season of the school’s all-time leading scorer in Demi-Jean Martorano.  All told, Guagliardo finalized his career with a 116-76-9 record.

“We’ve never hid behind injuries, and the team never let us use that as an excuse,” Guagliardo said of his unit in 2014.  “Everything that could have been done to get us to be successful and to help us win was done, and I’m very happy about that.  Our assistant coaches, Melissa Neglia and Chrystie-Lynn Guagliardo, did an excellent job this season.  No matter what our record was, Staten Island was never a pushover on the soccer field, and it’s a testament to all the hard work our student-athletes and coaches put in.”

Guagliardo started his tenure at CSI after a 13-year stint at Notre Dame Academy High School.  Although the College landscape proved plenty different, Guagliardo bases much of his success on the same principles he’s utilized his whole life on the sidelines.  “We’ve always emphasized student first in our programs and that never changes with the scenery.  After that, we built a program at CSI that has preached a family environment.  You begin to treat your students as extensions of your family and vice-versa.  Whether they know it or not, you put everything you have into those kids, and seeing them develop into adults and seeing them come together to win championships and enjoy the experiences keep us going as coaches.”

Getting in front of recruiting early and taking the time to know and coach his players individually are what Guagliardo refers to as his calling-card to effective coaching at the college level.  While the wins over 11 seasons collected by the program are plenty to admire, the real payoff for Guagliardo through the years remains with what he was able to see off of the field as well, a trend that continues impeccably to this day.  “I’ve always been proudest of how we have always had kids that have been outstanding students first and have graduated, very many with high honors.  We’ve always had kids who worked just as hard on their life after soccer as they have done on the pitch.  When you can win games and see that type of student development, it really makes you proud.”

That said, CSI has been synonymous with winning soccer since the program started in 2004.  The team posted a 9-6 record in that initial season despite dropping its first four contests, and that spearheaded a run of five-straight winning seasons.  After a sub-par 2009, CSI followed with an 11-5 campaign in 2010, and then backed it up with a 13-5-1 season in 2011, complete with a CUNYAC Tournament Championship.  In 2013, CSI ripped off a program-best 16-3-2 record, a run that featured 16-straight undefeated games to open the season.  Guagliardo recorded his 100th career win in a 2-1 victory over City College of New York during the impeccable run.  It remains one of many highlights to a sterling career.

“The records are great but it’s never been about me,” said the humble coach.  “When you are doing something you love, seeing the ladies achieve, playing and competing fair and above board, playing hard and with passion, that’s all that has really mattered these years, that’s what I will take away the most from my years here.”

“We will immediately begin to search for John’s replacement, but it’s not an easy task,” said Gomes. “It’s not just the number of wins, but the culture and expectations that have been set with our women’s soccer program. Our next coach will have their work cut out for them.”

Admittedly, Guagliardo has not given much thought to the legacy he will leave behind in 2015, but he’s starting to catch on.  “I haven’t thought about the past too much because we’ve always been so focused on the present and the future, but as I am in the process of leaving, it’s nice to think about the successful run we’ve had, When it’s all said and done I just hope that those who knew me here at CSI, knew that we gave everything we had and that the amount of work that Melissa (Neglia) and I put into the program was something we never regretted.  The sad part is leaving all of my friends, a lot of fellow coaches who have given me guidance over the years, but I am looking forward to seeing the program continue its success.”

For now, Guagliardo is looking forward to the next chapter of his life, although he hasn’t gotten it all figured out just yet, and that’s just fine by him.  “It’s time for me to spend a little bit more time with my family.  My wife and I haven’t had a vacation in I-don’t-know when,” he chuckled.  “We’re going to start there and see what happens.”

The College of Staten Island plans to honor Guagliardo at the close of the academic year at their annual awards banquet in mid-May.